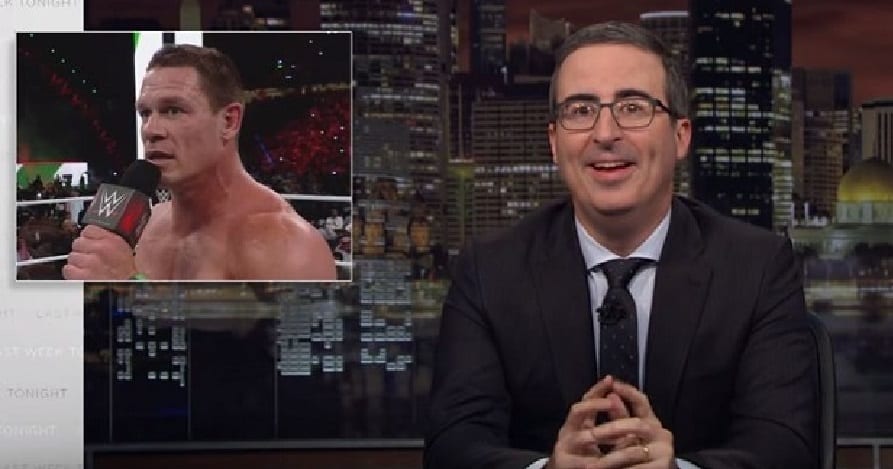 Last Week Tonight With John Oliver might be one of the best comedy news shows on television for some fans, but when they went at WWE a couple of weeks ago, it ruffled some features. John Oliver lambasted WWE’s deal with the Saudi Arabian government as they made the KSA the highlight of their main piece.

Oliver went back at WWE after the update that the WWE Crown Jewel event will go on as scheduled and it was not pretty.

During their weekly updates before the main story, John Oliver brought up the Greatest Royal Rumble and showed Titus O’Neil’s legendary slip down the ramp and under the ring while saying: “I just don’t think there is any better encapsulation of WWE’s relationship with Saudi Arabia than a wrestler meeting Saudi Arabian princes before falling flat on his face.”

They also showed The Undertaker’s promo on Raw a couple weeks ago when the crowd booed Taker when he mentioned Crown Jewel.

“I think the WWE itself just turned heel. Do you know how much it takes for wrestling fans to boo a wrestling event at a wrestling event? That is the kind of reaction you’d expect to hear if the WWE Championship was suddenly won by Beck.”

They mentioned the insensitive Instagram post from WWE then they made fun of The Dead Man by saying that his catchphrase is: “Boo! I’m a big beef ghost here to drive you to hell! Boo! I’m a beef ghost! Boo!”

The Last Week Tonight editing department closed off the segment by playing a promo in the style of a cartoonish WWE complete with pro wrestling clips saying there are no female wrestlers allowed to wrestle and John Cena will be there if he wants to take a major PR hit. They said someone will “rest in pieces” while making a joke about Jamal Khashoggi and if you don’t like it then WWE has 2 words for you… “suck it.”

So it looks like WWE going to Saudi Arabia for Crown Jewel hasn’t been lost on the media at this point either.