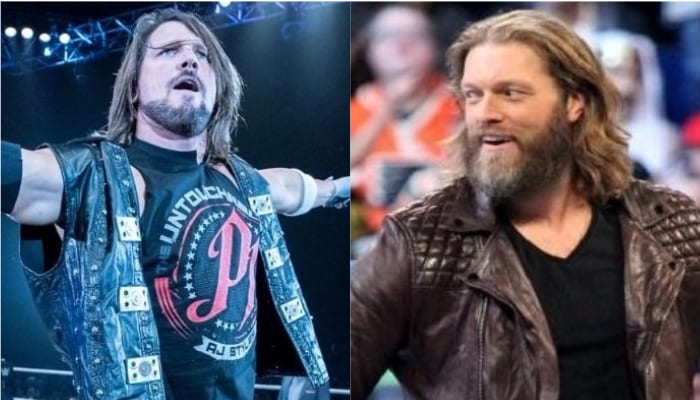 There are a lot of dream matches that fans would love to see and plenty of different combos that you could put a guy like Edge in. He’s a WWE Hall Of Famer who had to retire far too soon because of a neck injury — but the Rated R Superstar still reeks of awesomeness.

One guy who’s currently also pretty awesome happens to be AJ Styles. He’s been tearing up WWE since his Royal Rumble surprise debut under 3 years ago. It seems like AJ has been in WWE for way longer, doesn’t it? That’s probably because he’s accomplished so much.

Edge recently commented on Instagram with a picture of the two of them together saying that it was a shame the two never got to have a match together because they were never under the same roof while Edge was wrestling. It is a shame and we would like to fix that. Unfortunately, that doesn’t seem likely to happen seeing how Edge will never wrestle again and has expressed on many times that he has no interest in returning to the ring.

Of course, that changed for Shawn Michaels who often said he was done and gave up pro wrestling. But Edge might be a different story. After all, he was forced to retire because of a neck issue and currently, he’s acting, podcasting, and fathering — so he doesn’t have time to risk anything major.

But it’s still one of those things we can dream about and I guess that’s why WWE 2K games exists so we can see how a match between Edge and Styles would play out as many times as we like. Who would you pick to go over between the two?