WWE is intent on heading to Saudi Arabia for Crown Jewel, and at this point, it is too late for them to postpone the show as the arena set-up is already under construction. With an increasing amount of people angry over the show, WWE seems to have dug themselves a symbolic grave on their Instagram account.

The account tweeted a photo of The Undertaker’s urn with the DX logo spray-painted on top of it. Alongside this, they added the quote “Respect is out of the window at #WWECrownJewel.” 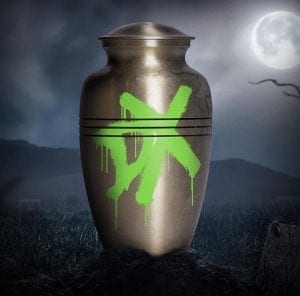 As one would expect, this combination wasn’t looked at too positively by the users on Instagram, who have started to fight back against WWE for adding such an insensitive comment, given what has transpired in Saudi Arabia and subsequently came to light.

In fact, this has gone so far to where a number of users are actually adding the hashtag “#CancelCrownJewel.” Obviously, these responses will most likely go ignored, as WWE seems intent on pushing forward with the controversial show, which is set to take place on November 2.

Take a look at some of the responses to the picture:

The company of WWE has no ethics no morals no care for their performers all they care about is money, not fans so, therefore, I will not watch any WWE programming despite my love for the workers like AJ and Bryan and by endorsing an all-male show and only putting on an on female show to counteract the negativity they’re not a progressive company where women are breaking that ceiling they are a money driven machine #CancelCrownJewel

You guys are f*cking morons if you don’t understand why your caption is ironic as hell since you’re disrespectful as hell. I’ll definitely be boycotting

Crown Jewel should be our the window. Evolution and Crown Jewel show how hypocritical WWEs business is. Yes new territory is great for wrestling but not at the expense of dignity.

Is WWE seriously going through with this? If so it’s a disgrace considering what has happened in Saudi Arabia and what is ensuing from it. Most European and major world leaders have denounced Saudi Arabia. Business owners have refused to the go the summit in Saudi Arabia including Sir Richard Branson. Yet Vince McMahon and Triple H are continuing to promote this PPV. needs to be canceled otherwise WWE look a like a joke as they are currently the center of his whole Vision 2030 scheme run by the man who’s probably the one who ordered the hit on Mr. Khashoggi – promote evolution which is a step in the right direction NOT something that is going to regress the global opinion on WWE. Whether anyone agrees or not politics and WWE hosting this event is not separate. They are intertwined and by not pulling out when the country you’re based in is considering economic sanctions on Saudi is a bit foolish on behalf of WWE. I’m sure though it might have something to do with the $40+Million per show agreement they have with the sports authority there.??‍♂️ Poor showing.

If you desire to read any further comments, you can find thousands of them on the picture. Some are coming to the defense of the Crown Jewel show and Saudi Arabia itself, much like JBL has done– but these comments are in the minority.

Where do you stand on Crown Jewel? Do you think it should continue or be cancelled? Let us know your thoughts, opinions, and reactions in those comments below.