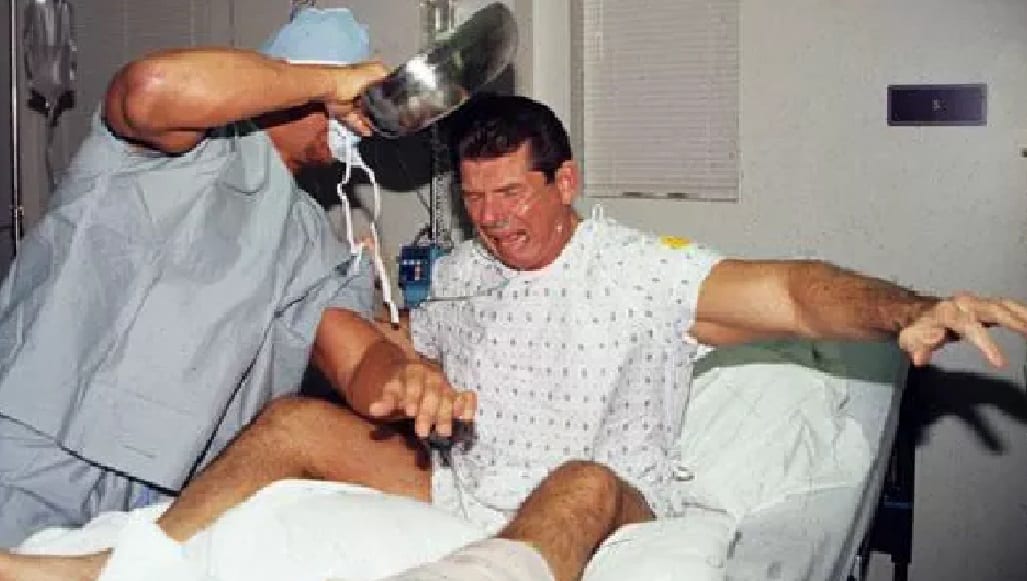 Vince McMahon found himself in a hospital bed with a television camera pointed at him in 1998 in the middle of the Attitude Era. Little did he realize that Mr. Socko, a name that would be forever synonymous with Mick Foley would be invented that night, but Steve Austin would also clock him over the head with a real bedpan.

As Bruce Prichard remembered the Raw segment that we all remember so well on Something To Wrestle With, he not only revealed who helped Mick Foley come up with the Mr. Socko character, but also that the bump Austin gave McMahon with a bedpan was completely spur of the moment as well. In case you need a refresher, you can check out the video clip below.

“A shoot bedpan — it was wonderful and it raised this huge knot on Vince’s head which was probably the funniest part of it. But yeah that was a Vince McMahon/ Vince Russo creation that they did so much of that was Mick Foley and his improv and the ‘Mr. Socko!’ That he and Al Snow came up with. It’s just a goof they did it on camera and (in Vince McMahon impression) ‘I LOVE IT!'”

“You know, now Mick can’t go anywhere without f*cking socks so that’s some good sh*t. Yurple The Clown and some balloon animals. But when Steve grabbed the bedpan, Steve just grabbed sh*t that was near him and hit Vince with a bedpan and about killed him.”

So there you go, one of the most iconic moments in WWE History turned out to be a “happy accident” as Conrad Thompson put it. Not only did we get a great bedpan smashing spot which don’t come along very often, but Mr. Socko was created as well thanks to Foley and Snow’s wild senses of humor and boy, did it stick.