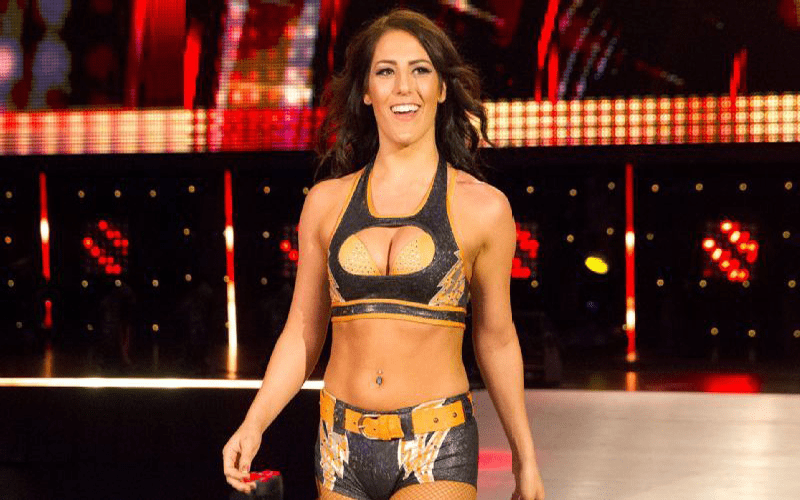 Tessa Blanchard is still in her twenties but is considered by many to be in the conversation for best women’s wrestlers in the world. Currently signed to Impact Wrestling, Blanchard is the current Impact Knockout’s Champion.

During a recent appearance on Busted Open Radio, Blanchard gave an in-depth perspective into her legendary family, her goals for the future both in Impact Wrestling and her career in general. She also revealed whether WWE was wrong not to sign her after her tryout with the company a while back.

Blanchard is the daughter of Tully Blanchard, the granddaughter of Joe Blanchard and the step-daughter of Magnum T.A. With such powerful figures, Blanchard is truly backed by some of the best. With all their extensive knowledge of the wrestling industry, Blanchard describes what the best advice she received from each of them has been.

“Oh yeah, so there is actually- so many stories come to mind. One, in particular, was my dad told me this story about how he had his very first hometown match in San Antonio, Texas against Dory Funk Jr., and they had to do a 60-minute broadway. He told me in the first twenty minutes he got blown up, and that even if he didn’t want to take this Suplex or take this Body Slam, you know, Dory picked him up and he was doing it. Dory had to carry him the last forty minutes of that match. He said that it was in that moment that he decided to never be out of shape again in his life.

“My grandpa would always tell me fatigue makes cowards out of us all. It was actually- he had a gym. My grandpa had it in his garage. There was a big sign up on the wall that says, ‘fatigue makes cowards of us all.’ So I think that’s why my dad always preaches endurance and be in shape- tip-top shape, all the time. That’s one thing he always preaches to me, so that’s some advice I always hold onto.

“Then my step-dad… When I first started wrestling, I didn’t tell my family about it for a good six months. Then it came- when I was training, Michael from High Spots told me ‘Tessa you can’t train here anymore, unless you let your family know, ’cause there could be some issues.’ And I was like ‘hey, don’t worry, I’ll tell them!’

“So, I reached out to my step-dad, who I hadn’t talked to in a year. I hadn’t talked to anyone in my family for a year. I told him ‘hey, I’m training to wrestle now. I’d love it if you could come and check it out.’ It was about twenty minutes from where they lived at the time, and I’m not really sure if they took me seriously or not or just thought it was something I was trying out, but not the next week but the week after he ended up showing up with my little brother, and I was in the ring with Cedric Alexander at the time. I was like ‘hell yeah!’ I saw them come in and was like ‘hell yeah, Cedric! Let’s do our thing’ We were in there just training, doing our thing and I’m so comfortable in the ring with Cedric.

“Afterwards, my step-dad rolled up to the turnbuckle, and he was like ‘Tessa, you’re not good, but you have IT. Now you have to go out there and become undeniable.’ That is where my whole ‘become undeniable’ thing comes from, ’cause that really stuck with me.

“My dad and my step-dad tell me there are some things that you just can’t teach. You know, you can learn the moves, learn all that in-ring stuff, but there are some things you just can’t teach. For him to say that I have IT, I guess that spoke to me. It drove me to work hard- harder, harder and harder, so I’d be good one day, and be great one day.”

Given that Blanchard’s father and step-father were once rivals, Blanchard was asked if they get along now that they’re part of the same family and will be linked together forever.

“They do, they do. Honestly, our whole family has been through so much, but I think it’s really cool to go back and- ’cause all bias aside, one of my favorite matches is Starrcade ’85, my step-dad and my dad [in an] I Quit match. Just to watch that and be like ‘those are my dads,’ that’s really neat for me.

“You know, it wasn’t always like that. When I was younger, you know, our family had a lot of hard times. I lived with my mom and my step-dad. My dad got us on the weekends when he was in town. I remember just going on vacations and my dad would just get us for the weekend and we’d go and he’d bring us back. That’s what we knew. So I don’t know. Now that I’m a little bit older, I’m able to have that stronger relationship with my dad that I didn’t quite have at the beginning. But I don’t know, it’s interesting. It’s an interesting dynamic.”

With just five years in the business, Blanchard has accomplished so much. She has won multiple Championships, been featured on several prominent shows and she has traveled the world and became a competitor any promotion could count on. Given all of this information, Blanchard explains what her goals in Impact Wrestling and in a wider context, the wrestling industry is.

“So when I- around 2014 I had my WWE tryout, and right after, I thought right after that that it was going to happen for me. I thought, ‘you know what? I’m gonna get signed, I’m gonna go there. This is what I’m gonna do. Hell yeah, everything is on track!’ Then it didn’t happen for me, and I was really bummed out at first, but looking back, I’m so glad that it didn’t happen for me then because I don’t think I would be the woman I am today or the athlete that I am today if it did. I wouldn’t have got to travel where I’ve traveled, I wouldn’t have got to have the matches I’ve had and grown from if I had gone there.

“Never did I picture myself at Impact, honestly. I was a little bit hesitant at first, going to Impact. But now that I’m here, it feels so right. It feels like this is where I’m supposed to be right now. I want to- I want to be a star one day. I don’t want to be passable, I don’t want to be good, I want to be great. I want to be one of the best in the world and go down in the history books one day. That’s what I want. That’s my dream, that’s my goal.

“So where am I gonna be five years from now? Where am I gonna be three years from now? I’m really not sure. I’m taking it day by day and going with my gut, honestly. I’m just trusting my gut, because I did have opportunities to do other things this year, and working with Gail and Jimmy Jacobs and Don Callis and Scott, they don’t want me to be good or passable. They want me to be great and they believe so much in the end product that they’re willing to take the time with me to get there, and I appreciate that more than anything- how much time and energy they invest in me.”

Finally, Blanchard revealed whether she blames WWE for choosing not to sign her back in 2014 when she tried out for the leading company.

“Honestly, the tryout was one of the most physically trying things I’ve ever done in my entire life. When I had that tryout, I was very, very green. I was probably less than a year into wrestling. I had never lifted a weight in my life. But I gave it everything I had, and I remember Regal telling me, ‘Tessa, if you didn’t get signed, would you quit wrestling, or would you keep wrestling?’ I was like, ‘no, I love this. I’ll keep wrestling,’ and he was like ‘ok, you need to do that. You need to go out there and you need to keep wrestling.’ I think- what I took from that was like ‘Tessa, go out there and see the world. Tessa, go out there and wrestle absolutely everybody and do everything you can.’ Since that, that’s what I’ve been trying to do. Never did I think I’d be twenty-three years old and get to go to Australia and Japan and Mexico and England, and have the first-ever televised women’s match in China in history. Things like that, like, that’s crazy. That blows my own mind.”

Do you think Blanchard will be a WWE Superstar someday? Where does she stack in the best Champions not employed by WWE? Let us know your thoughts, opinions, and reactions in the comments below.

If any of the quotes above are used, please credit Ringside News for the transcription.