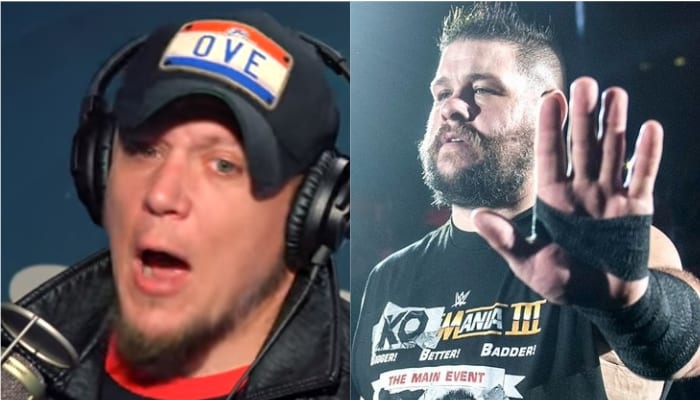 Sami Callihan was recently a guest on Busted Open Radio when co-host Mark Henry brought up those guys who worked as pro wrestlers for years before signing with NXT like Aleister Black, Kevin Owens, and Finn Balor. Callihan noted how frustrating it was to come into the WWE PC with so much experience behind him and being treated like the rookie by guys who were cross-over athletes just because they’ve been signed with WWE for longer but had no indie wrestling experience.

While using a football analogy, Callihan said that guys like Kevin Owens were handed the ball and “given blockers” as he explained his statement to describe why he didn’t go as far as some others with the kind of experience in the business that he possessed going into the WWE Performance Center and what helped him come to the conclusion to leave WWE’s guaranteed money.

“It’s one thing to be given the ball, it’s another thing to be given the ball with blockers to get a little headway and actually do what you’re supposed to do. But at the same thing, I realized that I wasn’t who I should be and I am not a complacent person. I believe that mediocrity with me is dead. Like I wasn’t going to sit down there and collect a really good paycheck.”

“I was like, ‘You know what? If you guys ain’t seeing it right now I’m going to leave. Like I want to be the top guy where ever I am and it seems like right now there’s no possible way of me climbing that ladder so take your paycheck and I’m going to go out and bet on myself and it’s the best decision I’ve ever made.”

Sami said he didn’t want to be someone collecting a paycheck like an NFL player riding the bench during the games but acting as a “practice player,” so he bet on himself. He didn’t want to be the guy teaching younger talent and that’s what he felt like he was being used for — which is fine, but that’s not what Callihan wanted to do. So he left.

Only time will tell if Callihan will find himself back in WWE with a different outlook eventually. But he recently signed a new contract with Impact Wrestling so he seems to be pretty happy just where he is being himself.