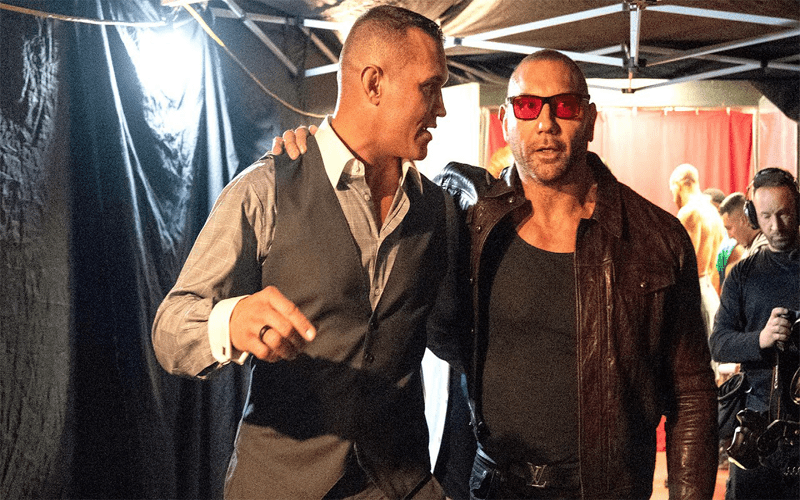 Batista has come a long way since his days as a World Heavyweight Champion in WWE. Now a famous Hollywood actor, “The Animal” was invited back home to WWE for the thousandth SmackDown Live episode, which coincidentally took place just two blocks away from where he grew up in Washington D.C.

As fans should be aware of, those in the entertainment industry usually find themselves in grueling schedules. From the travel to the maintenance, from the early mornings to the practice, they never stop. Such is the case with WWE Superstars, and Batista was likely to have felt this worse than the rest of the talent backstage at SmackDown 1000.

Batista is currently filming a movie in Toronto and had to make the flight over to Washington D.C. after a day of filming. Even on the jet, “The Animal” was going over his lines for the next day of filming. After barely arriving in time for the show, Batista had to go out there and say what came to his mind before leaving to get back on the jet for the flight back to Toronto after the show concluded.

WWE was there for the entire journey, as they follow Batista from the set of his movie through his flight to backstage at SmackDown 1000 and even into the ring before Batista leaves to return to the movie set. You can watch the video below.

During the show, WWE also teased a potential match between Batista and Triple H. Whether this was an attempt by Batista to get fans and management talking about a potential comeback tour or if this was a planned spot, it had social media ablaze.

Batista has made it known that he wants to come back for one final run with WWE, but he would want to work through the entire experience as opposed to a one-off PPV appearance. He has also claimed a Triple H bout at WrestleMania would be a good final match for him.

Do you think you could cope with a schedule as hectic as the one Batista found himself in? Would you be invested in a Triple H vs. Batista bout? Let us know your thoughts, opinions, and reactions in those comments below.