Punishment Martinez is coming into the WWE Performance Center with a good run under his belt from ROH where he had a stint with the ROH Television Title in the process. His deep voice, tattoos, and long hair were staples of his character in ROH. While the voice and tattoos are likely to remain the same (although he might always get more ink), it looks like his long hair has gone away.

Martinez, real name Luis Martínez appeared in several WWE promotional photos, but you might not recognize him as Punishment Martinez until you got a closer look at his tats because the hair is all gone.

It looks like he went the way of Baron Corbin except the WWE Universe didn’t even have a chance to see him with long hair. It’s certainly an interesting decision but it is probably way cooler in the Florida sun to have a shaved head.

It’s a good look on him though. Only time will tell how long it will be until we see him on NXT television and his hair can always grow back, but for now, it looks like Martinez is going hairless. 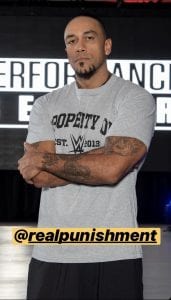