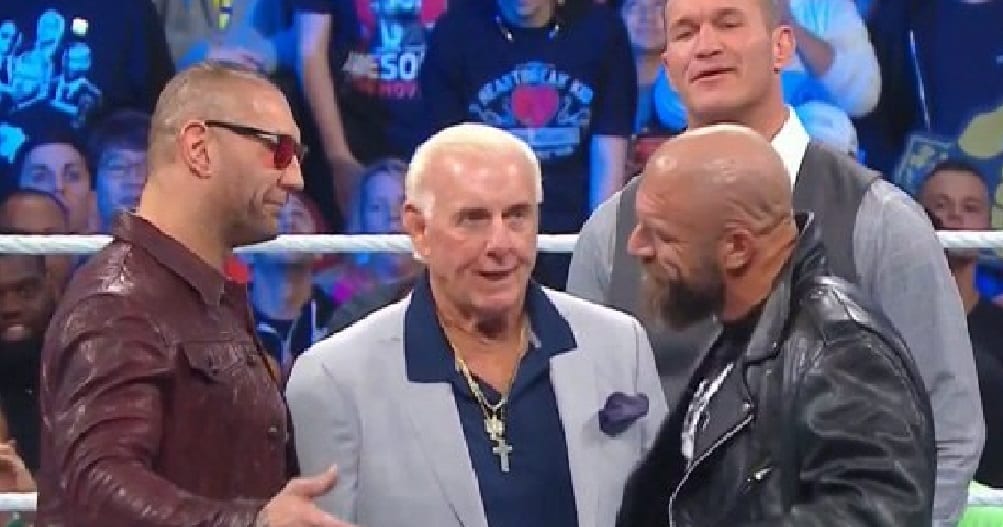 Batista returned to WWE on SmackDown 1000 and the reunion of Evolution was a great promo overall. There was heat, there were laughs, and then Batista made a statement that Triple H has never defeated him in a match which piqued The Game’s interest as well as ours.

Batista wanted to do this program when Guardians Of The Galaxy came out but Triple H and Stephanie McMahon apparently didn’t want to chance it because they didn’t know if the move was going to be any good. But it was… it was very good and now Batista is a huge star.

Since teasing this match, it’s likely to deliver down the line and Dave Scherer speculated on PW Insider Elite audio when the perfect time would be to host this kind of a match and that is when SmackDown Live debuts for the first time on Fox in October 2019..

“It is the perfect place for that to happen. I mean think about it. They want people to tune into that event, the new network obviously. But what a great way to do it but to have a movie star take on Triple H?”

Only time will tell if WWE will pull the trigger on this match at all, but hopefully, they can make it work. In a perfect world, Batista and WWE were able to work something out last night at SmackDown 1000. Actually, in a perfect world, CM Punk might still be World Champion and he would have headlined at least 4 WrestleManias, but Batista vs Triple H in 2019 might be a close second. How does it stack up on your list?