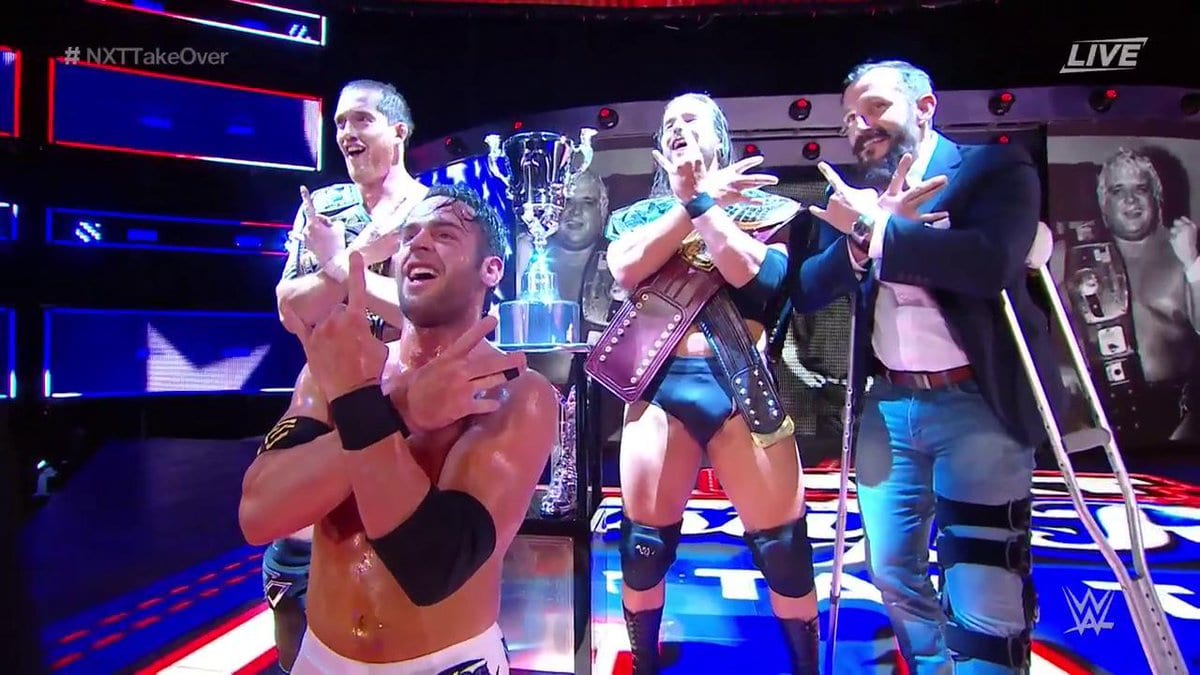 Adam Cole, Roderick Strong, and Kyle O’Reilly of The Undisputed Era were recently interviewed by Sam Roberts, where the group revealed they never expected to be grouped together when they signed to WWE on individual contracts.

Despite each member of The Undisputed Era coming to WWE on their own, all four men (including Bobby Fish) would end up together as one of the premier factions on WWE’s developmental brand. They were aligned together initially on their contract debuts, as they targeted Drew McIntyre after his NXT Championship win. Strong would join them later on after turning on Pete Dunne during a TakeOver NXT Tag Team Championship title match.

Adam: “[We] definitely didn’t expect, at all, that we’d be thrown together in a group. I mean, as it was happening it was kind of like ‘oh cool, we’re all gonna end up being in the same place,’ but the last thing I expected was ‘ok, Adam Cole, Kyle O’Reilly, Bobby Fish, and Roderick Strong are gonna be running shop around here.’ It’s crazy…it’s crazy.”

WWE recently released a graphic detailing the top ten factions of all time. On the controversial list, The Undisputed Era ranked tenth, despite only working together for a short period of time. 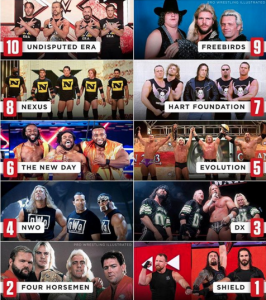 Roderick: “We’re just getting started. In the grand scheme of things…”

On that note, the group explained whether they deserve to be on the list, given their tenure with WWE is still in its infancy.

Adam: “I’m really confident in what this group and where we believe we are going, so to me it’s only a matter of time before we get higher and higher on that list. To see it, that was awesome. It was very cool, but if anything, it was more motivating to kind of move up that list.”

All four members of The Undisputed Era debut in WWE 2K19 together. Given how interested they are in video games, it was a massive milestone for them, but they are already looking to what comes next.

Adam: “Yeah, that’s the weirdest process about this job, especially here- is that there are so many cool things that happen, where you kind of want to sit back and smell the roses and say ‘wow, this is awesome!’ But then you’re already thinking a mile ahead about what the next landmark is, what the next goal is. This is just an example of that.”

Roderick: “And that’s the good thing about this group in general, I feel. Just us being together before and then being here is [that] none of us settle on just one accomplishment. It’s great, it’s amazing, we can talk about it until we’re blue in the face but then we’re like ‘what can we do next? What can we do next?’ We never get too comfortable, and I think that is one thing that makes us as good as we are together.”

Kyle: “It keeps us accountable to grow, and to just keep improving and making The Undisputed Era continuously the hottest thing in WWE.”

Each member of the group has been in the business for years, and they’ve made names for themselves around the world. They’ve competed in promotions such as New Japan Pro Wrestling and Ring of Honor, honing their craft before coming to WWE. Given their success outside of the WWE sphere, Roberts asked if it adds or subtracts from their confidence within WWE while knowing they could find success outside if they ever left the company.

Adam: “Yeah, I think subconsciously it definitely does. It’s not something that I really sit down and think about. But just to know- I don’t know. I love pro wrestling, sports entertainment- however you wanna word it. I love it. It’s the best job in the entire world. So I want to make sure I’m doing this for as long as I possibly can. Obviously here is where I want to do it, but yeah, there is a good feeling knowing that we’ve been successful outside of here, as well as here.”

Roderick: “It’s wild to think…we were just talking about this the other day in class. This is it. This can never end for you if you never really want it to end. Whatever job it may entail, and that’s- this is obviously the company you want to do it in. You want- it’s amazing, that that’s in front of us.”

Kyle: “In a place like this, the Performance Center, you know? There is life after wrestling. We could become coaches or producers, or agents. It’s cool to know opportunities are there.”

Roberts presented the three present members of The Undisputed Era with a question. He asked whether they go to bed thinking about how much they’ve accomplished, or how much there is to accomplish. The group unanimously agreed on the second option.

Roderick: “I felt like coming here- like I don’t know, I don’t want to necessarily say closed the chapter or ended a chapter, but it like…It kind of opened a new one. I feel like everything I accomplished before was great, but like, everything I accomplish now will be the hardest, but the most- I’ll be able to relish in it, feel accomplished here because this is a whole new test, a whole new playing field. It’s amazing that- who knows what I can do. I’ve done some great stuff, but I mean with just a little time with these guys, it’s been amazing. It feels like I could do this for another twenty years.”

Roberts noted that the group all look like real Superstars and not just guys playing characters on television.

Adam: “Well, I was just gonna say, it’s a very real thing, though. We all talk every day, we all feel the same passion about wrestling the same way. We all eat, sleep and breathe this. We all believe in this group specifically. So I think that’s a big reason it’s translated so well is because people can tell whether it’s- well we’re doing interviews backstage or whether we are in the ring together, we enjoy being around each other.”

Roderick: “That was there even before we came here.”

Kyle, pointing at his NXT Tag Team Championship: “These babies right here are never more than ten feet away.”

Finally, Roberts asked if the group had a text chat together.

Adam: “Yes. There is, yeah. That’s how you know it’s a real thing. The group text is alive and well.”

Who do you want to see The Undisputed Era go up against? What excites you about the group? Let us know your thoughts, opinions, and reactions in those comments below.