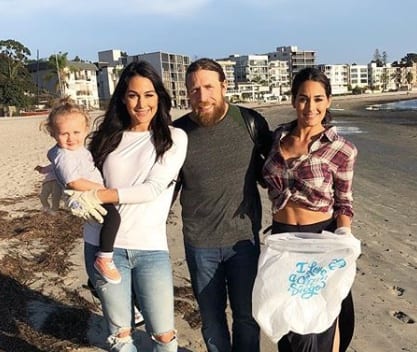 It’s always nice to have a feel good story in the world of professional wrestling from time to time, and while The Bella Twins may not be the best of characters on screen, they’re still human off of it.

There’s been a great deal of hatred aimed in the direction of Nikki and Brie over the course of the last few weeks, and while some of it may be warranted, the majority of criticisms are purely based on personal preference. So then, if we put that to one side, we should take the time to look at the positives too as opposed to just the negatives.

For example, the sisters did their part for the environment yesterday alongside Daniel Bryan, who is known for his love of nature.

The sisters are both back on the road on a full time basis with the company right now, with Brie being rumoured to face off against Liv Morgan at the upcoming Evolution pay per view.

Nikki, on the other hand, will challenge Ronda Rousey for the Raw Women’s Championship in a bout that has been met with mixed reviews from fans. Some are intrigued to see what a heel Nikki can do against Ronda, whereas others feel like it’s a waste of a title match for Evolution.

Whatever the case may be you can’t deny the success of the sisters, and they’ll likely be featured members of the WWE family for many more years to come courtesy of the ‘Bella Empire’ they’ve built.