Lawler informs that he attended a Donald Trump rally last week and was captured behind the President by cameras. Since then he has received multiple death threats and insults on social media and he thinks that’s ridiculous. He points out that Donalnd Trump is the President and a fellow WWE Hall of Famer, and he was invited to that rally because they’ve been friendly with each other over the years.

He doesn’t think one person’s beliefs or values should result in threats or insults from those who don’t see things the same way. One person on Twitter remarked that Lawler should have died when he had a cardiac arrest several years ago, and that’s just sad. Lawler says it’s quite an honour to see a President in person and Moore agrees, noting he’d go to an Obama rally as well if he was invited. 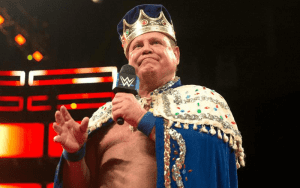 Lawler also received criticism this past week for tweeting that it was sad that the Cleveland Indians famous logo would be retired at the end of this year. People immediately accused him of being racist because of this and he couldn’t believe some of the things people were saying about him. He notes that Cleveland called their team the “Indians” out of respect for indigenous people, and those who don’t know the facts are angry over nothing.

Lawler was completely shocked by Nikki and Brie Bella turning heel this past week on RAW by attacking Ronda Rousey. He didn’t see that heel turn coming, but he’s aware that Rousey needs someone to challenge for her RAW Women’s Title at Evolution.