Jericho laughs while informing that he forgot his recorder for this interview, so he’s working on the fly with someone else’s equipment. Aries says that reminds him of TNA forgetting their steel cage for an All Cage PPV in St. Louis several years ago. He thought that was a terrible idea for a PPV anyway because a full show of cage matches is too much. Jericho agrees, pointing out that WWE watered down their Hell In A Cell matches by putting two or three of them on each year’s PPV as well. 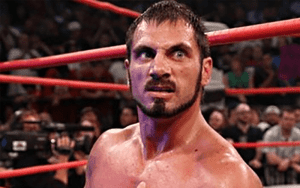 Aries notes that shortly after that embarrassing PPV in St. Louis the company informed him that they’d no longer be paying for his hotels or rental cars, and this angered him. Within a few days he was suspended for having a “poor attitude”.

He points out that working for Impact Wrestling’s new regime has been great. After taking some time to adjust to the new management and approach, the last 6 months have been the most fun he’s ever had in the wrestling business. It’s been great to have ownership of his own life, and having the ability to work for ROH as well and apply his trade around the world has been awesome.