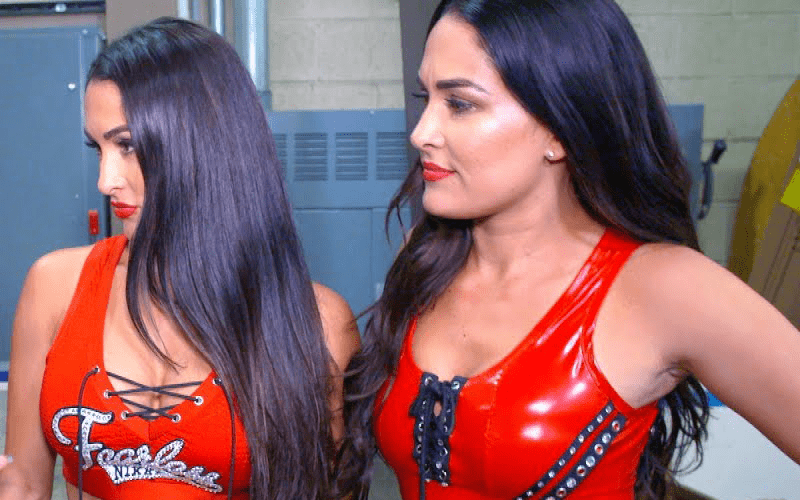 As the majority of fans predicted, Nikki and Brie Bella turned on their ally in Ronda Rousey following their victory over the Riott Squad in what was a rematch from WWE Super Show-Down in Melbourne, Australia. This was ultimately in an attempt to set up Rousey’s RAW Women’s Championship title defense at Evolution.

Following RAW, The Bella Twins were interviewed by WWE’s Kayla Braxton, who asked the girls why they betrayed somebody like Rousey, who stood by their side.

Brie was first to comment, claiming that Rousey was just taking the spotlight away from them.

“I mean- been by our side? You mean taking up our space! Standing in front of us, taking our shine. Is that what you mean?”

Nikki would follow this up by saying their goal isn’t just to have Nikki fight for the Championship but to prove to Rousey and those watching around the world that the revolution is all about The Bella Twins.

“Brie and I are here for Evolution- but we’re here to remind everyone, even Ronda Rousey that this is a Bellalution. Thank you.”

You can watch the clip below:

Additionally, The Bella Twins were active on social media after WWE’s flagship program went off the air. To begin with, Nikki quoted a fan’s tweet, saying she is glad someone remembers. She, of course, is referring back to 2015 when she and Brie told the audience that they begged for a revolution, and the Twins gave it to them.

She would also further clarify why she wants to fight Rousey. Apparently, Nikki wants to prove she can beat an Olympic-level athlete. She also teases that a proverbial reign as RAW Women’s Champion would be her longest reign of all. This is obviously a mock at fans who criticize her and WWE for surpassing AJ Lee’s reign as Divas Champion.

Sunday October 28th I will shock the world. The days leading up to Evolution I will prove to you all that I will be ready to beat an Olympic athlete. That I can be badder than the baddest one of the all. The 28th I’ll start my new reign. And it’ll be the longest of them all. N pic.twitter.com/XjVWXIL6xK

Do you think Rousey will retain? What are the odds that Nikki wins the title at Evolution? Let us know your thoughts, opinions, and reactions in those comments below.