He started One Hour Tees 10 years ago; a shirt design company that provided custom design t-shirts for people with a variety of requests. He points out that this company took off somewhat, but not as much as it should have and his partner left the company. He decided to change his pricing model, and focused on quick turnaround times and things started to grow. He has a digital printer that can make shirts in 2 minutes, and this was a big part of One Hour Tees’ growth. 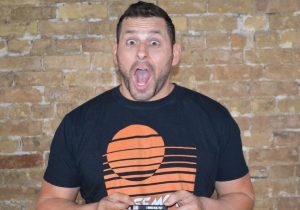 He points out that his start in the wrestling business occurred when Colt Cabana needed a shirt to wear on Smackdown that said, “I broke Big Show’s hand”. After that he began providing bulk orders for independent wrestlers so they could sell merchandise at their weekend shows, but he knew there was a way for wrestlers to sell merchandise all over the world throughout the week as well.

They started ProWrestlingTees.com and the rest is history. He recalls making a shirt for Kevin Steen in the early days of the business, and it was a big deal that he was selling one shirt per day. Now they sell 300-400 daily. He says that there are roughly 1000 wrestlers with shirts available on prowrestlingtees.com.