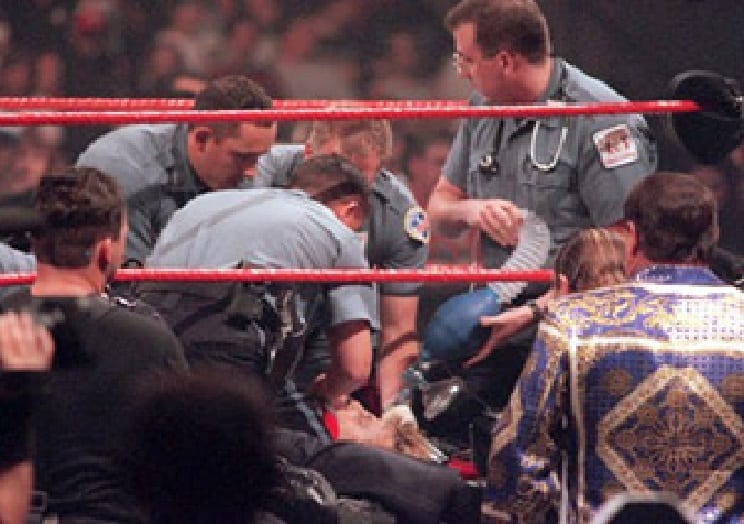 Owen Hart died tragically in 1999 at Over The Edge. It was a pay-per-view that actually carried on after Hart was mortally injured as his zip line sent him smashing into the turnbuckle during a stunt in his entrance as he portrayed the Blue Blazer gimmick. He was supposed to wrestle The Godfather for the IC Title during that match, but few people remember how Jimmy Korderas was the referee.

Korderas recently spoke to Why It Ended where he told the tragic story of Hart’s final moments alive and how Hart, in reality, could have just been caring about Korderas because as the referee cleaned up the ring from the hardcore match that just ended, Owen Hart almost smashed right into him.

“I heard yelling and I heard people saying that it was [Owen yelling to get out of the way] I can’t confirm that but I wouldn’t doubt it knowing the kind of guy he is. That he was coming down and probably saw — a lot of people probably don’t realize that right before that incident happened there was a hardcore match in the ring and there was a lot of debris scattered in the ring and we were clearing out stuff in the ring and as we were clearing stuff I was actually moving toward that corner that he fell in.”

“I didn’t find out until the next day from Jerry Lawler as he said that he saw the last 15-20 feet of Owen’s fall and he thought, ‘my goodness he’s going to fall on Jimmy!’ I was apparently that close to him.”

“Yeah, I don’t know if it was his hand or his foot but like I was holding the top rope as I was kicking debris out of the ring and moving toward that corner and almost instantaneously I felt something brush against my head and the top rope snapped out of my hand and snapped back and jammed my fingers. I thought the rope broke because they use actual rope in the WWE it’s not cable. So I’m looking at it and the rope’s intact and I’m like, ‘what the hell? Did somebody throw something?’ As I turned around you know and there he was.”

“You’re trying to put two and two together and you can’t.”

Korderas said he doesn’t think about the tragedy on a daily basis at this point, but he does think about it often and still considers it one of the worst days ever in his life. But Owen Hart’s tragic death is still something that will live on as a terrible event in pro wrestling that should have never happened.