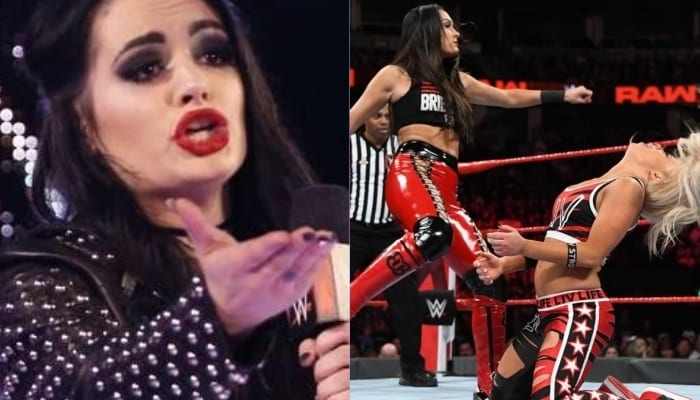 Liv Morgan took a couple misplaced kicks to the face on Raw a couple weeks ago, but she’s fine now. After competing in the WWE Super Show-Down, Mogan has proved that she can still go in the ring. Paige is someone who understands injuries very well as she experienced a very sad one that tragically ended her career far too soon, but in the end, she said it’s not Brie Bella’s fault.

Just as with Sasha Banks who was involved in the spot where Paige was injured a final time, she doesn’t blame the person doing the move because she understands that mistakes happen. But as Paige expanded on the topic while speaking to Lilian Garcia on Chasing Glory, she revealed that she’s more upset at Ruby Riott and Sarah Logan for pulling Morgan back in the ring to take part in a multi-woman suplex after they knew she was knocked out.

“I feel so bad for Brie, like she’s never hurt someone, this is the first time she’s hurt someone and she gets blamed for it, come on dude like it’s an accident. It’s an accident, Liv doesn’t blame her, you know?”

“The thing that I didn’t like about it is the fact that her teammates brought her back into the ring to do a suplex when everyone knew she was knocked out. That’s the thing I didn’t like.”

“It’s just like don’t come back for the suplex, we know you’re hurt. We have concussion meetings all the time, take care of yourself. But also her tag team partners as much as I love them, they’re very sweet girls, they know she got knocked out… you don’t let her back in the ring again. That’s what Sasha did with me, as soon as she saw something was messed up she said, ‘I’m not continuing the match.’ That’s a professional, right? I was trying to continue it, I was trying, trying, trying she was like, ‘Stop, you’re gonna hurt yourself even more.”

Paige is a pretty wise voice of reason in this kind of situation because she’s been through it. Thankfully, Liv Morgan is okay and able to compete, but who knows how many times a similar event might happen again which means every WWE Superstar needs to realize the signs of a concussion so they can say stop even if an injured person wants to keep going.