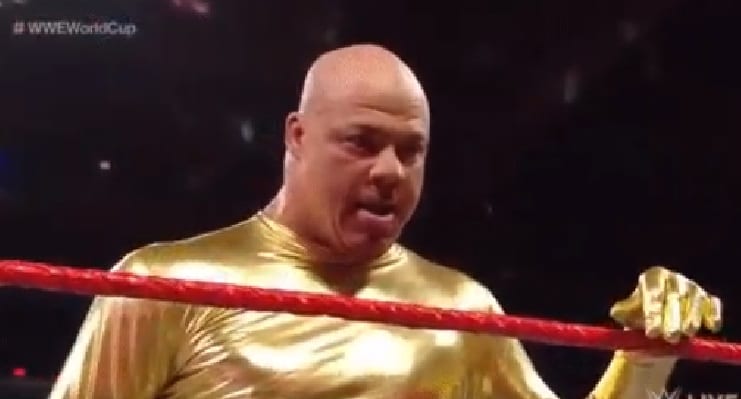 Baron Corbin thought he was doing great on Raw this week as he introduced a bunch of international talent including one Conquistador for a big battle royal.

Spain's CONQUISTADOR is BACK in this 10-MAN #GlobalBattleRoyal! #RAW pic.twitter.com/f7Z6ES3Oq2

The Conquistador slid under the ropes and left the battle royal early while Corbin laid out all of the indie wrestlers who WWE was able to call in for the angle. The Conquistador chilled at ringside until the final man was eliminated before he got back in the ring.

Baron confronted the Conquistador finally after he tried to avoid getting beat down. Suddenly, the masked man started hitting German suplexes on Baron Corbin and he soon eliminated the Raw GM solidifying his place in the World Cup Tournament at WWE Crown Jewel.

As Corbin looked up in surprise, the masked Conquistador peeled back his hood to reveal it was the Olympic Hero Kurt Angle. It looks like he’s back and wrestling which could set up something very interesting for himself and Baron Corbin down the line.

But Kurt Angle is back and one thing is for sure, he’s competing in the World Cup Tournament at WWE Crown Jewel.