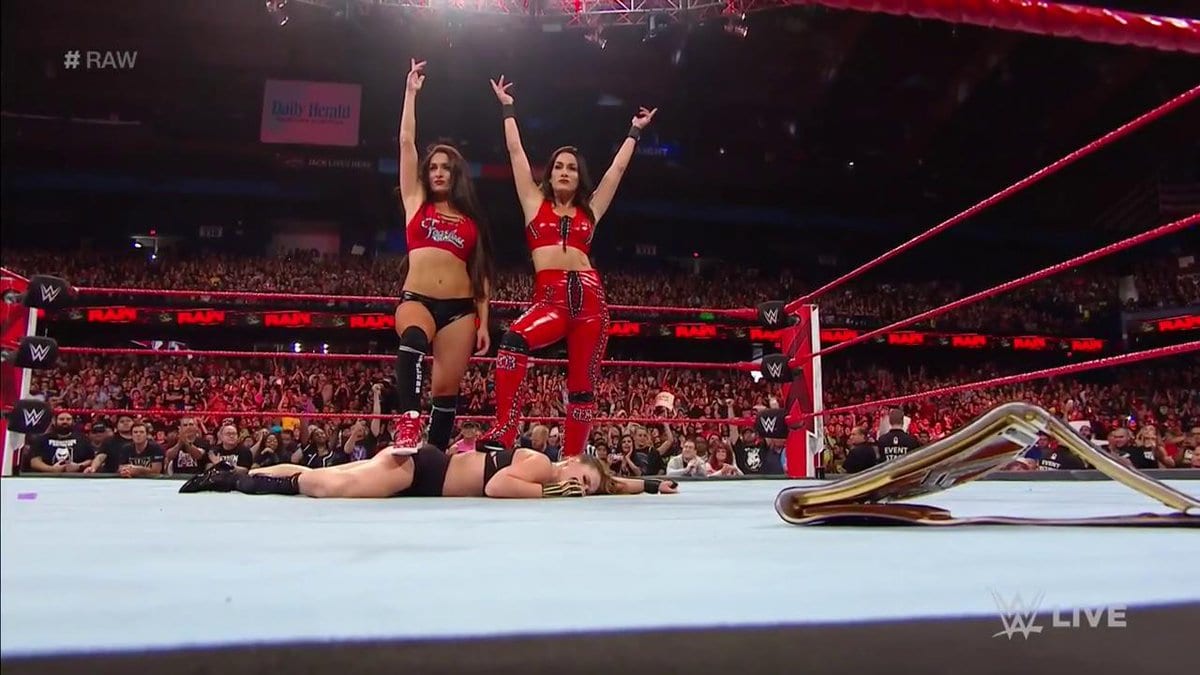 Fans got a couple Super Show-Down rematches on Raw this week including The Riott Squad vs Ronda Rousey and The Bella Twins. With WWE Evolution coming up, they’ve already announced that Rousey would be defending her Raw Women’s Title, but we just don’t know who it will be against yet.

This match did have an entertaining spot where Liv Morgan was able to get some retribution on Brie Bella a couple of times including one spot where they rolled around and brawled. This revenge was also noted on commentary.

Ronda Rousey ended up eventually getting the hot tag and she took some punishment to Ruby Riott while concluded in an armbar and a tap out thanks to the Bella Twins holding off Liv and Sarah.

After the match was over, The Bella Twins rushed the ring and hugged Rousey.As they raised their arms in victory, Nikki Bella suddenly smashed Ronda across the back and then both Bella Twins stomped Rousey down. This effectively turned both Bellas heel.

Rousey got some heat back on her and fought off Nikki and Brie, but the challenge was still laid down as the Bella Twins smashed Rousey’s face against the steel ring post and then stomped her down as the referees had to back them up. Then they sent Rousey into the steel ring steps and smashed Rousey against the barricade for good measure before they dragged Rousey by her hair and shoved her in the ring.

After standing on Rousey and posing, the segment was over and the Bella Twins turned heel on Rousey before they placed the Raw Women’s Title over her and walked off. So it looks like at least one of the Bella Twins will be facing Rousey at Evolution, it’s anyone’s guess which one it will be if not both.