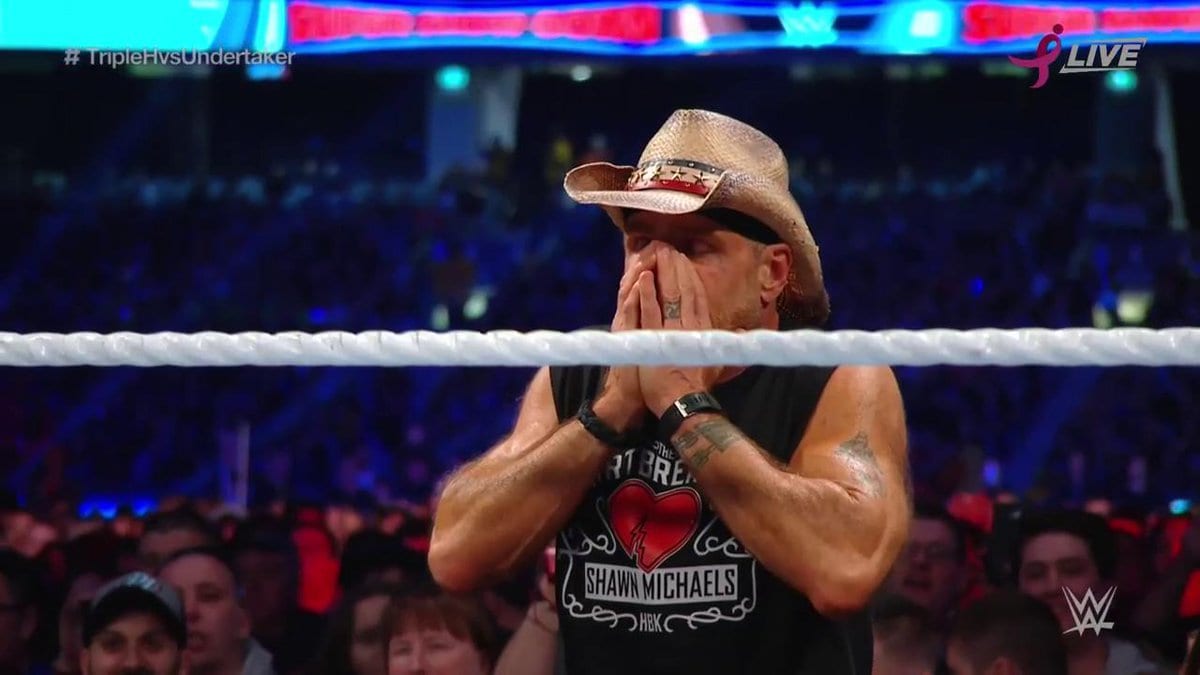 Shawn Michaels appears to be headed back to the ring, and he showed it in a big was in Melbourne Australia during his best friend’s match against The Undertaker.

The first notable bump came when The Undertaker set Triple H up on a table and HBK ran to save him from a legdrop off the barricade. Then Taker took him down with a big boot on the apron and Shawn took a hard bump. It looked like HBK and Triple H were going to then catch Taker on a dive, but Triple H headed him off with a chair.

It didn’t take long for Shawn Michaels to hit a Superkick on Kane that set him up on a table. Then Triple H hit an elbow through the table from the apron to the floor.

After Taker hit Hunter with a Tombstone and the WWE executive kicked out, The Dead Man took out the referee with a right hand. Then Taker pointed at HBK and said “you’re next” before grabbing a chair. Shawn didn’t get involved at that point, but he remained alert as The Undertaker kept asking him if he was watching as he dismantled Triple H.

Shawn watched in horror as Undertaker hit Triple H with a chair shot over and over again. HBK got on the apron and pleaded for Taker to stop, and then he got in the ring to take a right hand which gave Triple H a chance to hit a spinebuster.

Shawn Michaels handed a sledgehammer to Triple H later on which he used against Taker’s chair shot to lay The Dead Man out. Later on, Michaels got in the ring and Kane headed him off and was going to chokeslam him, but Shawn kicked him in the groin. Then The Undertaker tossed HBK over the top rope.

But just as Taker was about to hit another Tombstone on Triple H, HBK jumped in and hit a Superkick and then went for another one that was blocked, but after a sledgehammer to the face, another Superkick, and a Pedigree… The Undertaker finally laid down for the 3-count giving Triple H the win.