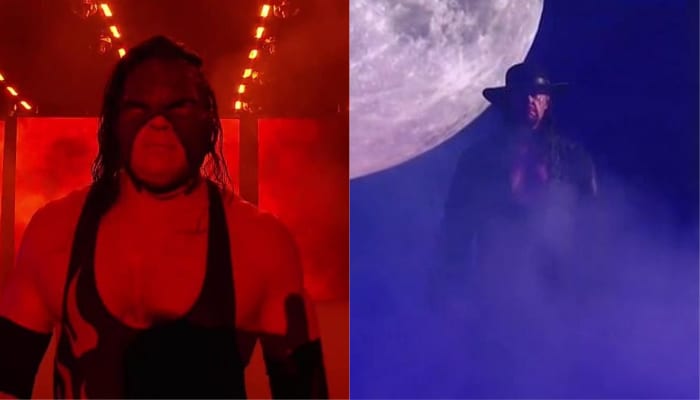 WWE is always changing, but some fans aren’t too keen on letting go of certain things. The Undertaker vs Triple H headlined WWE Super Show-Down in Melbourne Australia and the over 70,000 fans in attendance were psyched to get to see this “last time ever” encounter. But fans online noticed a couple things that they didn’t really appreciate.

Kane came to the ring with his new music by CFO$ which replaced the Jim Johnston classic. This is a move done internally to wash away as much of his legacy as possible because CFO$ runs the show when it comes to music now.

But most fans were really upset about the fact that Kane didn’t receive fire pyro during his entrance on the show… but The Undertaker did. Taker also got his blue lights, lightning, and smoke but the fire isn’t seen as often. It was indeed a very interesting decision, but maybe they figured since Kane wasn’t wrestling he didn’t need the focus of pyro.

The match was soon made a No DQ and once the action got underway a lot of the questions about the entrances might have been forgotten. But Twitter was still full of queries for a burst of time wondering why WWE didn’t give Kane any fire but provided it for his brother.

Man, I hope the fact that Undertaker got fire and Kane didn’t doesn’t give him a complex… #WWESSD

Why couldn't Kane use some of that fire for his entrance 😒

Where was the fire pyro for Kane’s entrance 😩 #WWESSD