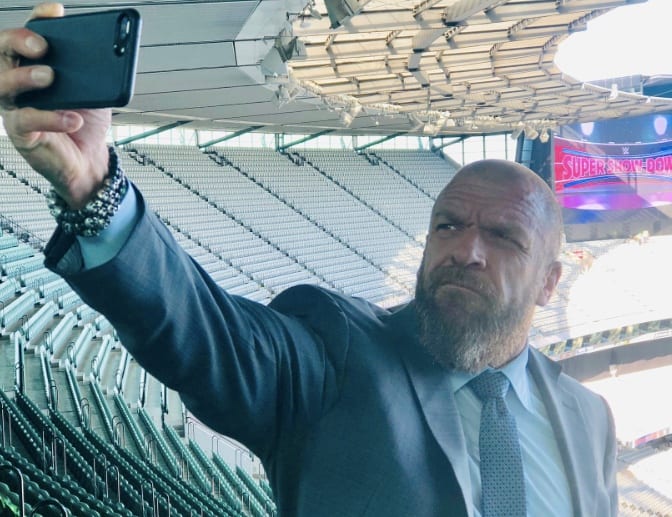 Triple H has revealed on social media that there are expected to be around 65,000 fans present in Melbourne Cricket Ground tomorrow for WWE Super Show-Down.

When this show in Australia was first announced, the initial expectation was that WWE would try to fill the stadium – which can hold up to 100,000 fans. While some fans didn’t consider that to be particularly realistic, at the time, there was still a chance it could happen.

Now, according to HHH, the company will be filling less than three quarters of the stadium in an event which will likely be headlined by the man himself taking on The Undertaker.

Dropped by the @MCG this afternoon on the way to speak at Bastion Collective in Melbourne. This city is abuzz about #WWESSD. Spoke with @theheraldsun about what it’ll feel like with over 65,000 fans in the stadium … tomorrow night is gonna be LOUD. pic.twitter.com/XsDSfSszQJ

There are a series of interesting matches that will go down in Melbourne tomorrow, but you have to wonder if this is something that will cause them to re-evaluate what kind of cards they’re going to put on for these big international shows.

The general thought is that these events are nothing more than glorified house shows, with the outcomes being viewed as incredibly predictable more often than not. Still, WWE will continue to go ahead with them, especially in Saudi Arabia where they have a ten year deal to put on some really high profile shows.

Super Show-Down will come and go, but given the nature of WWE, we’ll probably have forgotten all about it by this time next week with Evolution and Crown Jewel being just around the corner. Either way, it’ll be interesting to see what kind of visual we get of MCG tomorrow night after this news.