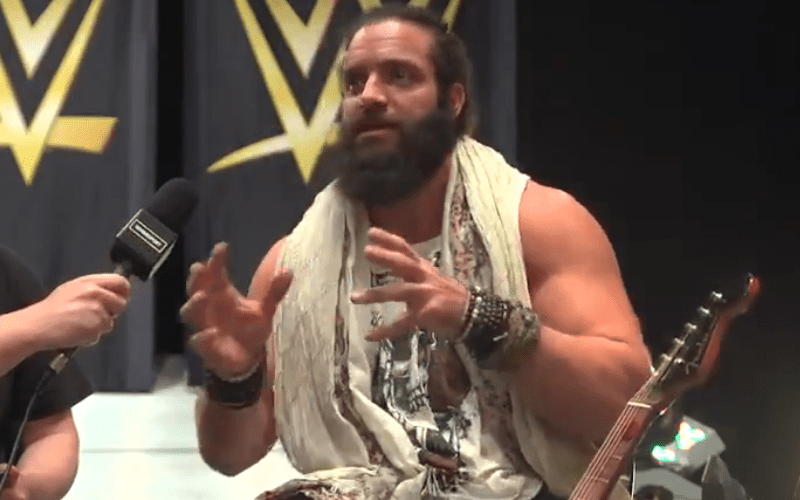 Elias continues to call out former WWE Champion, The Rock.

While speaking to Alex McCarthy of Give Me Sport, Elias was asked if we will ever see him step into the ring with the Most Electrifying Man in sports entertainment and that’s when he called The Rock out again.

“Listen, no inspiration whatsoever. Okay, I’ve stated this before. The Rock, he did do this. He’d play guitar and things like that. He would do cover songs on Monday Night RAW. But guess what? I’m doing original music every single week man. I got an album out with all original songs written, performed by me. I even did a song on piano, if you listen to that.”

“What I’m getting at here is people make comparisons and maybe it’s because how the crowd is. You know, I got my catch phrases, “Walk with Elias”, things like that. The thing is, The Rock can not do what I do. So, when I hear these comparisons, I get worked up about it. You know what I mean? Look, he’s doing great things. He’s out in Hollywood, he’s killing it out there. He obviously killed it when he was here [WWE] but times have changed. It’s different now. Elias is the biggest and best thing going in WWE. Will we share a ring? He knows where to find me. I’ve told him, you know what I mean? I’ve called him out a few times. He knows where to find me on my show, Monday Night RAW. If you want to Walk with Elias, come on out.”

You can check out footage of his remarks below…

@IAmEliasWWE says his character takes "no inspiration whatsoever" from @TheRock and says "The Rock cannot do what I do."

He also sent a message to the Great One: "Rock, you know where to find me, on my show, Monday Night #RAW; if you wanna walk with Elias, come on out." pic.twitter.com/7KKqLFexYo