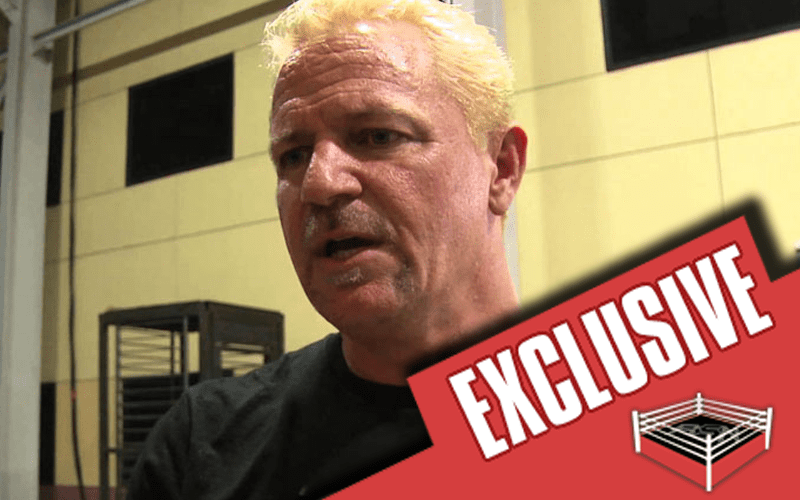 I recently sat down for an exclusive interview with WWE Hall of Famer Jeff Jarrett. During the interview, we discussed a variety of topics from WWE HOF, Owen Hart, and more. Below are the transcripts and audio from the interview.

Jeff Jarrett on the importance of having family in the business: “When I broke in, a lot of people said, “It’s the best thing that ever happened to ya cuz it helps ya get in the business, but it can also be the worst thing because there’s already a standard set.” I do think it’s not just completely secluded to the wrestling business. Banker’s kids become bankers. It’s sort of what you follow in the family footsteps. Wrestling is so unique, it’s obviously not a true sport, it’s a form of entertainment. You sure need to know the in’s and out’s. I’m very thankful and grateful for the lessons I learned from my Grandmother years and years ago and my Father, and other family members I carry with me because there’s nothing quite like the best teacher in the world and that’s family period.”

Jarrett on The Kliq: “Oh God, I rode with those guys every day. I guess the Kliq got named in 97, ’96 maybe. During ’93-95, me and Kevin Nash specifically, went to Germany, U.K, Israel, six-seven times in 1994. Me n Shawn knew each other in Tennessee during the territory days. Scott and I used to joke that we saw each other more than we saw our own families. At the end of the day, Kevin Nash always said it best, “This isn’t show friends, it’s show business.”

Double J on his country “gimmick” and who created it: “Gimmick? Gimmick? It was a collaboration but at the end of the day nothing really gets started or stopped unless Vince McMahon says so. You gotta tip your hat off to that guy. He had a vision, we collaborated, a big group of us did that video, “With my baby tonight,” it was so well done. Jim Johnston wrote the song, obviously, Road Dogg sang it, well, he says he did. I don’t know if that’s actually true. It was a lot of fun. That was a fun time in my career.”

Jarrett on being part of both The Four Horsemen and nWo: “WCW the only thing you can really have any sense of control with was what you could do in the ring. Whether it was The Four Horsemen or the world title run, U.S Title run, nWo, all that kind of stuff. I did enjoy my time there. Was it all perfect? It never is anywhere, that’s just the nature of the beast.”

Jarrett on going back to the WWF and the NWA Invasion Angle:“It never really got its traction. I understood the concept, but at the end of the day that was the peak or beginning of the peak for the Attitude Era and the NWA, which is always been near and dear to my heart and family going back to literally day one of the business, but the attitude era and NWA never mixed.”

Jarrett on Owen Hart: “I said it at the Hall of Fame, I’ve said it multiple times, not just in this business but in life you have very few times you run across a guy that has the integrity that Owen had. He was just a great human being. We both grew up in the business, our Dad’s were both promoters. Me n him hit off, we didn’t have to think too much about our matches. We both knew how to work a tag match. We got to talk about everything but wrestling and I cherish that.”

On being part of the largest nWo reunion at Pro Wrestle Fest: “I did a long form interview recently in Mexico and the reporter goes, “From the Four Horsemen, nWo, Bullet Club, and in Triple-A a faction called MAD” and asked if I have a favorite. Every faction so to speak was so different. All of them were fun. When I saw the talent list, I knew it was going to be a special night

If you’re a wrestling fan, especially of the nineties, the nWo helped define that era so much more than one character or any other cast of characters. If you’re a fan of that era you will def want to be there.”

On who came up with the Slap Nutz catchphrase: “My Grandmother used to call people slappies. That is someone who knows less n less every day. I added nutz at the end for character and off it ran.”

Jarrett on seeing AJ Styles, Samoa Joe, Bobby Roode, Eric Young and others in NXT and WWE: “To sit here and think of the names you just said, I couldn’t be happier for all of them. AJ, what a run, my kids knew AJ since being babies and now they’re up in middle school, high school and they see AJ on the cover of video games and that’s fun for us to talk about saying, “Remember when.” We’re very happy for AJ.”

On his induction into the WWE Hall of Fame: “I’m very grateful. When I got the call, all the way up to April 6th, I’m just very humble, grateful. I was in shock. I never thought I’d see it come but I’m glad I did and what a year it’s been.”

You can listen to the audio below.

(When using audio, quotes, or both make sure to credit Lee Walker III and Ringside News)