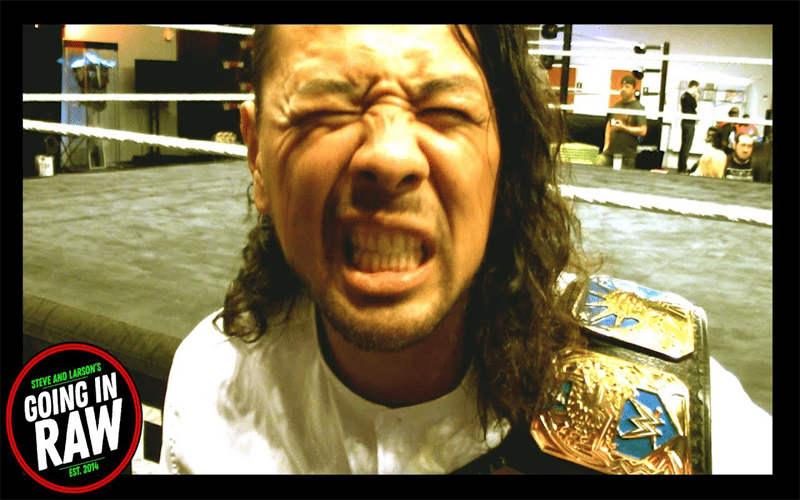 WWE United States Champion Shinsuke Nakamura was just interviewed by Steve of Going in RAW. During the interview, the SmackDown Live Superstar gave an insight into his arrival in NXT and the differences he found once he got to the main roster. He also reveals advice he gave to Velveteen Dream as Patrick Clark- the man behind the Dream’s character was just getting started.

To open up, Nakamura lightheartedly explained where his love for surfing came from. This passion of his has been made very public through Nakamura’s own social media and WWE themselves.

“A long time ago. In Japan, I lived close to the beach. Most every day, of the morning I would go to catch the waves. Looking for the waves. Yeah, peaceful, but also water always helps me with training.”

When asked to comment on the various transitions he has had to undergo through coming to WWE and NXT before making it to the main roster, Nakamura gave an insight into the differences at each level.

“Much, much different. Everything! So, yeah. I came from Japan to here. From the Tokyo Dome and so, a Japanese wrestling style I did. I didn’t need to adjust to wrestle at NXT. I could do my stuff and everything. A little bit of adjusting to the NXT style. So we had a producer for the matches and teachers and class. So this is kind of like a wrestling school. I felt I didn’t need to adjust at all. So people call me veteran- Oh my gosh!. But SmackDown- I joined SmackDown last year? The biggest difference is that it is a live TV show. We don’t have time to show everything- and we have a story. We need to pick the most important part of the wrestling; part of the story to do. So what is the purpose of this match? That is probably the biggest difference. House show and the TV show and the NXT and the SmackDown- all the fans are different. NXT fans are kinda- they love wrestling. Not only WWE, not only NXT- not only the indie scene, like the international scene. So massive fans [would be] coming to the NXT show. Also, [during] NXT we would wrestle at a house- cooler vibes.”

Nakamura is an experienced performer, but according to the “King of Strong Style,” he enjoys competing in front of any crowd, regardless of the audience size.

Finally, Nakamura confirmed the main Superstar currently in NXT he would like to face is Dream, noting that he actually gave the Superstar advice as he was finding himself in the business.

“Patrick. Velveteen Dream. He [has] found something. I remember I gave him advice when I was in NXT. At that time, he was still looking for his own character, right before he became Velveteen Dream. Patrick- he did too much. He has [done] a bunch of wrestling matches now, and a lot of moves. Just my opinion- so the audience can’t remember if a wrestler does too much- a lot of moves. [They have to make] one strong impression- so maybe tag matches in NXT or a road trip after the whole show, people will remember his character. [Beyond[ the other matches they watched, they would remember the purple guy; crazy moving. That is one of the keys.”

If you would rather watch the video version of the interview, you can do so below:

Would a Dream vs. Nakamura match interest you? Have you enjoyed his role on SmackDown or NXT more? Let us know in the comments down below.