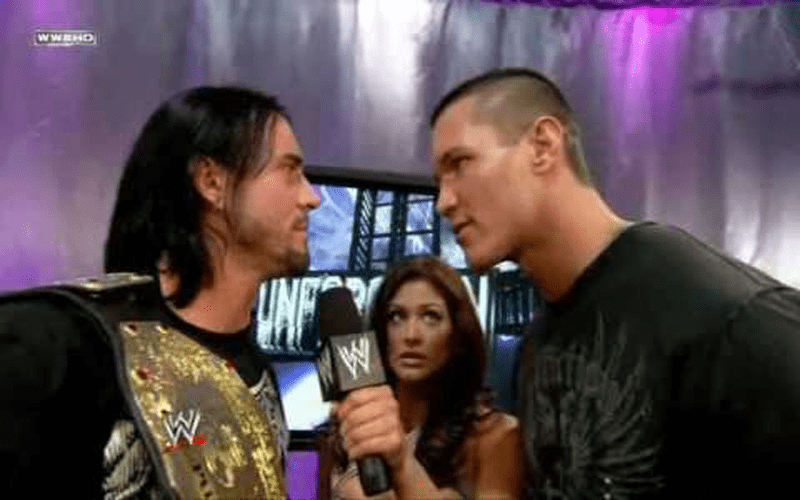 Roughly a decade ago, CM Punk was the World Heavyweight Champion in WWE. Come the Unforgiven 2008 PPV, Punk was scheduled to face Batista, Rey Mysterio, JBL and Kane in a Championship Scramble match in the main event to defend his Championship.

As many fans may be able to recall, Punk was showcased talking to Eve Torres in a backstage interview prior to the main event, which saw Randy Orton walk into the frame and start talking down to the Champion. From here, Punk was attacked from behind by Cody Rhodes, Ted DiBiase, and Afa Anoa’i Jr. and while Kofi Kingston tried to help the Champion, he was unsuccessful. Punk was eventually hit with a Punt Kick to the head and forced out of the match.

As the main event began, Chris Jericho came out to take Punk’s place in the match. This came after Jericho was defeated earlier in the night by Shawn Michaels. This eventually led to Jericho taking the victory in the Scramble and led to a Ladder match at No Mercy between Jericho and Michaels.

During the latest episode of Something To Wrestle, former WWE creative writer Bruce Prichard commented on the matter, which has spawned a number of conspiracies over the years- as fans look for answers as to why Punk dropped the title in such a fashion.

According to Prichard, there is no large conspiracy behind the title drop. Vince McMahon wanted the title to be on the line for the Ladder match, which the company had already designated to take place. As the contestants in Michaels and Jericho were both lined up, the title had to be taken off Punk somehow. With neither man scheduled to partake in the Scramble match, WWE decided to find their way around it and had Punk drop the title.

Prichard also notes that it was a bad call on McMahon’s part. Punk was frustrated with the entire thing, as showcased when didn’t give it his all in the attack segment we showcased above. Jericho and Michaels only needed a prop- they didn’t need the Championship. Prichard believes Punk was the one who needed it.

On Punk dropping the Championship, Prichard had the following to say:

“Confusion, really confusion, and when you look back, to me, Jericho and Shawn did not need that fu****g title. They needed a prop. They needed a prop for a Ladder match, okay, but they sure as hell didn’t need the championship. I thought Punk needed the championship. I thought that the championship helped Punk. But, at that point, it was needed for a prop… to have a Ladder match. So, as crazy and as many conspiracy theories that people wanna throw out there, it’s as simple as that. Yeah, it did [suck] and also what sucked is, you can see, hindsight being 20/20, you see the interview with Punk where they jump him and Punk’s not even into it. He’s frustrated and probably upset all rightfully so by the way. So you feel before they even jump him its, ‘Okay, I’m gonna do this, it’s whatever, f**k it’, and it did suck because it made no sense.”

If you watched back in 2008, what was your reaction to this? Were you a fan of Punk? Let us know in those comments below.

With H/T to Andrew Thompson of Fightful for the transcription.