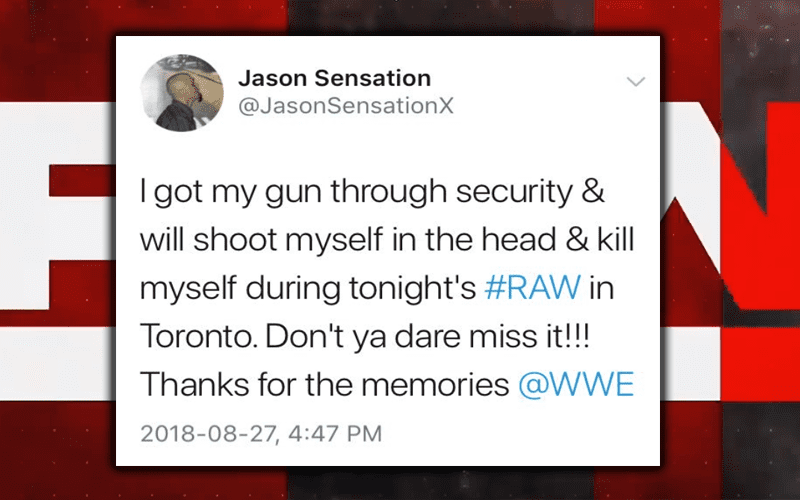 It was reported last month that Jason Sensation took to Twitter and mention that he was able to get a gun through security in Toronto for Raw and he planned on killing himself. It turned out that Jason wasn’t even at the arena and he did it as a joke. Police ended up detaining Jason after the incident.

Jason has now opened up about the incident while speaking to Hannibal TV and revealed that he was in a depressed state when the incident happened because none of his friends called him to invite him to RAW when they visited Toronto. Jason also mentioned that he was drinking with his sister earlier in the day before he sent out the tweet.

“They were in town and I was just in an emotional state. I was actually here, visiting my dad at my sister’s place and I had a few drinks with my younger sister. Sometimes we have a few drinks together. So I had a few drinks and I passed out and woke up and I was like, “oh great, well my dad was getting — he loves wrestling so much.” He was getting ready to watch RAW and he’s like, RAW’s in Toronto.” I went into my depressive state in that moment.”

“I was thinking whoever I’m in contact with in the company didn’t call and I was thinking whoever my friends are out of the company. This is very selfish thinking, mind you. Like I’m embarrassed to admit where my mind was at but I was in a very selfish state. I woke up, I was hot drunk and I looked at my phone and was like, “no one messaged me.” None of my friends that are going to the show messaged me. No one from the show messaged me. I’ve had some history with the company where I’ve sent out a whole bunch of shit online. That’s definitely burned my bridges and blackballed me from the company forever and that was years ago. And every now and again I say something stupid again because I am hurting and I am trying to just get a reaction out of them. Like, “do you even notice me?” It’s from a place of being hurt and never getting even a mention back again. Triple H will sign the Wellness Program letter to me. He’ll sign it personally and he’ll send it to me but I can’t get a tweet back or a message back online. I feel like I’ve been so blacked out from them that I can never even get their attention. So for years I’ve been sending out stupid shit like that for years but this was something that I didn’t even think through. I didn’t realize that there has been a couple of shootings. The officer that had to detain me and handcuff me explained to me about the shootings in Florida and the Game-Day shooting. I was like, “oh my gosh, I didn’t even know this was going on.” I’ve been so out of the loop but I woke up out of this stupid space. I felt like nobody noticed me.”

After Jason sent out the tweet, he went back to sleep before being woken up by his sister when the news went viral.

“I went back to sleep and my sister came running downstairs like, “Jason, you don’t understand what you’ve done.” I was like, it’s okay, don’t worry sis. I’ll just deactivate my Twitter.” I was half drunk and I don’t even know what I said and I deactivated my Twitter without even realizing what I said. The next person down the stairs was an officer. After they detained me, they were showing me that I was on TMZ.”

Jason closed out the interview by saying he regrets sending out the tweet. You can listen to his remarks embedded in the audio below.