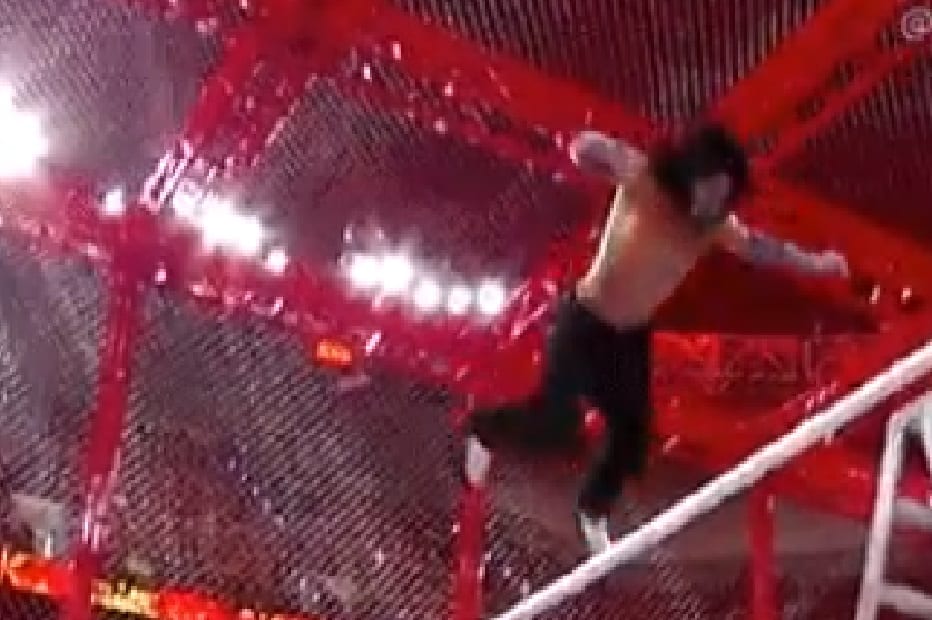 Jeff Hardy promised that Hell In A Cell would be memorable. After all, he said that he has wanted to do this match for a long time. It was on his bucket list to participate in a HIAC match and he finally got his wish against Randy Orton.

Fans were nervous that Hardy would do something crazy and Reddit has been full of jokes about Jeff doing something crazy the night after his brother Matt Hardy had to retire.

During the brutal match with Orton, The Viper painstakingly dismanteled Hardy.  One hard to watch spot included Orton finding a screwdriver under the ring and then taking Jeff up a few more gauges in his earlobe.

But that earlobe spot really seemed to rub Jeff the wrong way before he mounted a comeback after hitting a low blow.  It went back and forth for a bit and then things got very interesting.

Hardy set Orton on a table and then got a 20-foot ladder. He climbed up to the top and grabbed the top of the cell ceiling. Then Hardy swung off the cell and jumped down onto Orton… only Randy wasn’t there.

Hardy crashed through the table and after Randy made the referee count to 3, the EMTs ran down to tend to Jeff. Only time will tell what happens next, but this could be the kind of spot that could certainly change a character like Hardy’s.