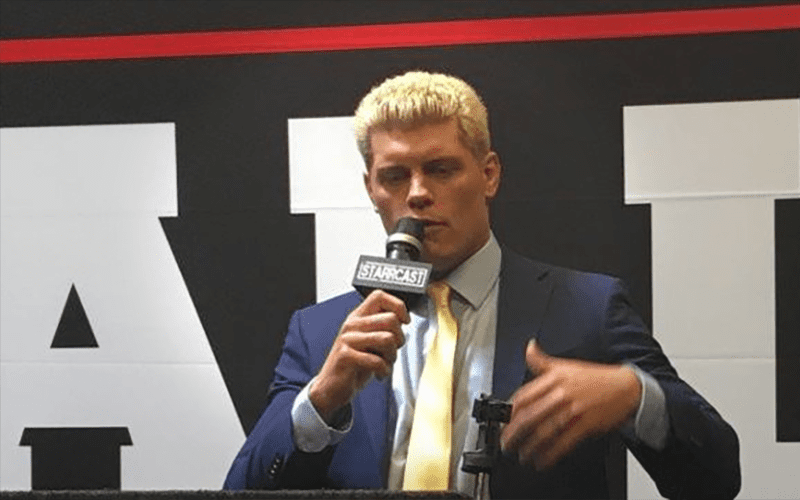 Cody Rhodes was released from his WWE contract on May 21, 2016. After being kept down on the card under the Stardust monicker, the son of the “American Dream” had had enough with his employer and wanted out.

Since entering the independent scene, Cody has become one of the hottest names out there. Now a core member of The Bullet Club and one of the three men responsible for ALL IN, Cody has perfectly shown what he is capable of.

A fan with the handle @prouddad122112 on Twitter responded to another fan, explaining that he felt Cody, Goldust, and Dusty were all treated very poorly by the company for years. This led to a response from the “American Nightmare” in Cody himself.

Cody politely disagreed with the fan. He says he felt both happy and challenged during his WWE run- even with the Stardust conundrum he found himself in. Furthermore, he noted that by the age of 24 he had already main evented a PPV- something many hope to do but never achieve.

I’d politely disagree. I was in a PPV main event by age 24. I was happy/challenged with the trajectory of my career there…even stardust. It stung but it was motivating to see guys pass my sparkly ass by, I saw what I was missing and went out and got it. Do the work. https://t.co/TPTMT3CQVC

He quickly followed this up by replying to @HOPZ316 who called him a class act.

I bitch all the time bro ha and I’ve got my Arya Stark list, but there’s more angels working there than assholes. And the ones that thought they could snub me, look down at the floor timidly when I walk by. Daddy eats first. https://t.co/tZdVlWN0qC

Cody defeated Nick Aldis to capture the NWA Worlds Heavyweight Championship at ALL IN on September 1 and is set to defend it against the former Champion at the NWA 75th Anniversary show coming up soon.

Did you like Cody’s run in WWE? What was your favorite and least favorite moments of his time with the company? Let us know in the comments below.