We are just a few days away from Hell in a Cell. While the event is not as hellish or cellish as it could be, it still has loads of potential. Samoa Joe faces AJ Styles for the WWE Championship. Braun Strowman steps inside the Cell for the first time in his career. Becky Lynch will go one on one with Charlotte Flair. There’s a lot of good that can happen.

We’re not here to discuss that, though. What’s the worst that could happen at Hell in a Cell? 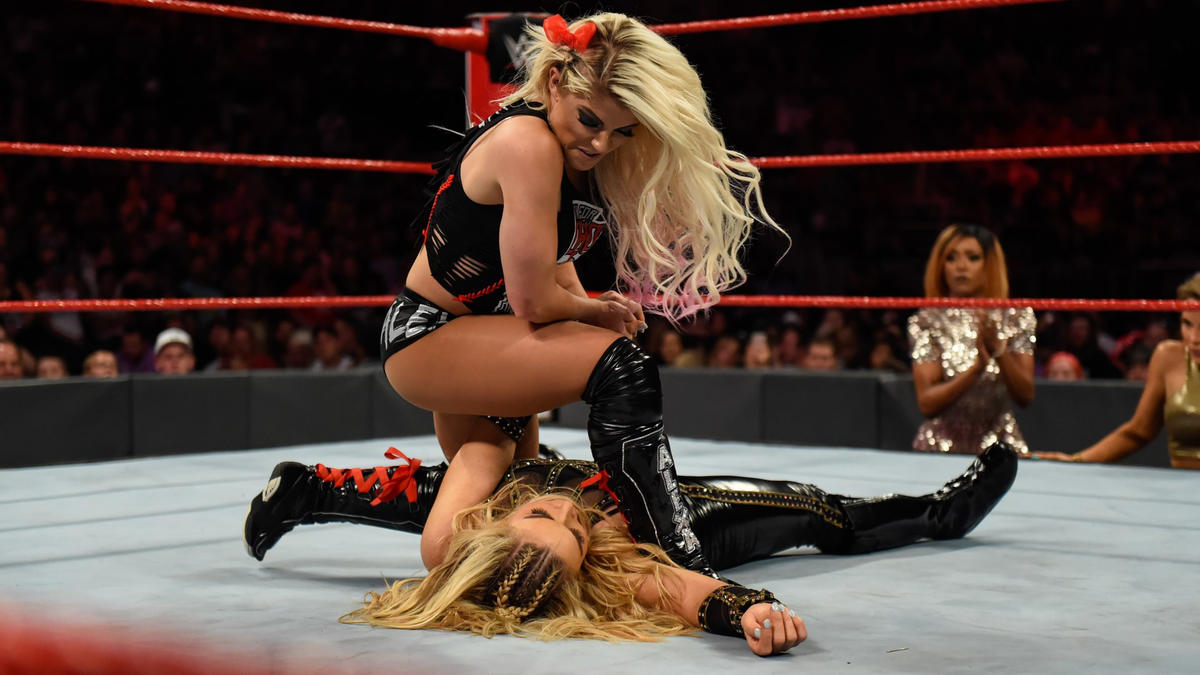 I think it’s fair to say that Alexa Bliss doesn’t stand much of a chance against Ronda Rousey come Hell in a Cell. While they won’t be competing inside the steel structure, the match will certainly be a painful one. After all, Alexa learned how to do armbars.

Perhaps an armbar is all Alexa needs to win back her championship at Hell in a Cell. She gives Ronda Rousey a taste of her own medicine, and the former UFC champion has no choice but to tap out. Alexa Bliss is now a four-time Raw Women’s Champion.

At Evolution, Bliss retains her Raw Women’s Championship against Trish Stratus, and Stratus raises her hand in victory. Rousey then attacks Bliss before announcing that they will face off in a Three Stages of Hell match at Super Show-Down.

The three stages are a lumberjack match, a street fight, and Hell in a Cell. Rousey then beats Bliss in the first two rounds, meaning that they don’t use the Hell in a Cell structure.

aj styles and samoa joe kick each other in the dick 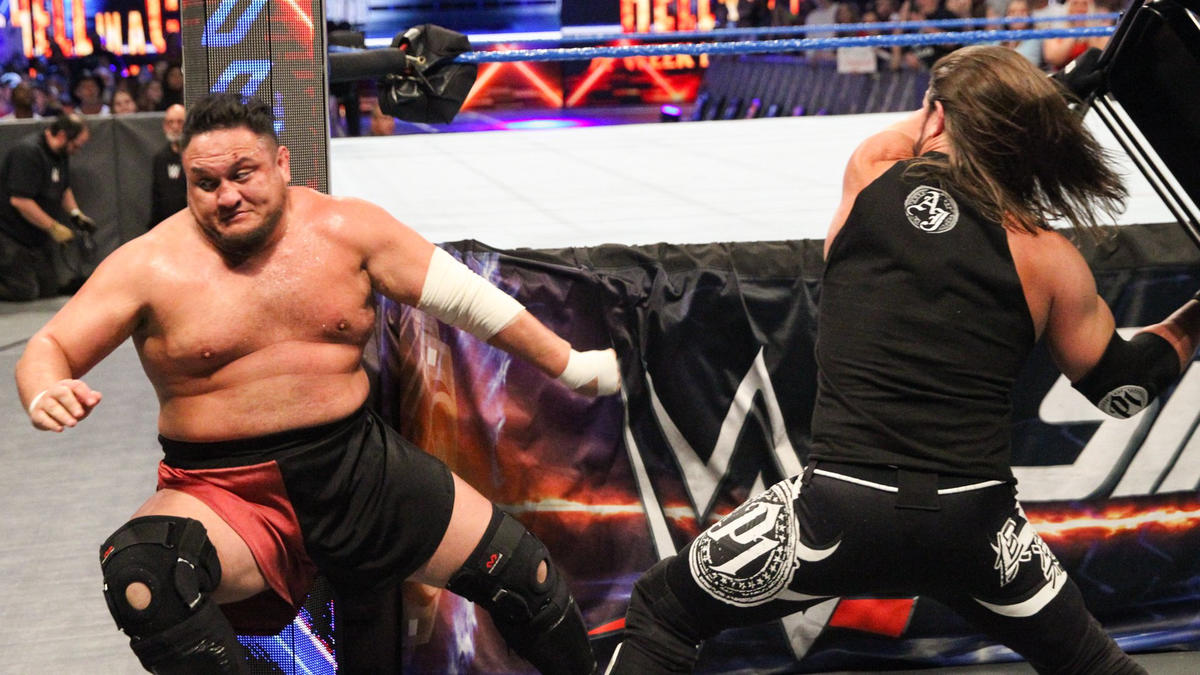 Once again, AJ Styles has let his emotions get the best of him, and now he’s scheduled to face Samoa Joe in a rematch for the WWE Championship. It will be a hard-hitting and brutal affair, that’s for sure. These two men will go to war.

Imagine that the two men are putting on an absolute classic. It’s the first ever 8 star match in the history of Dave Meltzer. In fact, it’s so good, that Meltzer immediately claims that he will boycott any and all other wrestling promotions and only watch WWE.

And then both men, in the heat of battle, both men just straight up kick each other in the dick. Both men writhe on the ground in pain and are unable to answer the referee’s ten count. The match ends in a double disqualification.

Next week on Smackdown, Paige sanctions a “Dick Kicks Allowed” match for the WWE Championship. Styles retains by stomping on Joe’s dick repeatedly, and then loses his WWE Championship to Sheamus.

money in the bank shenanigans 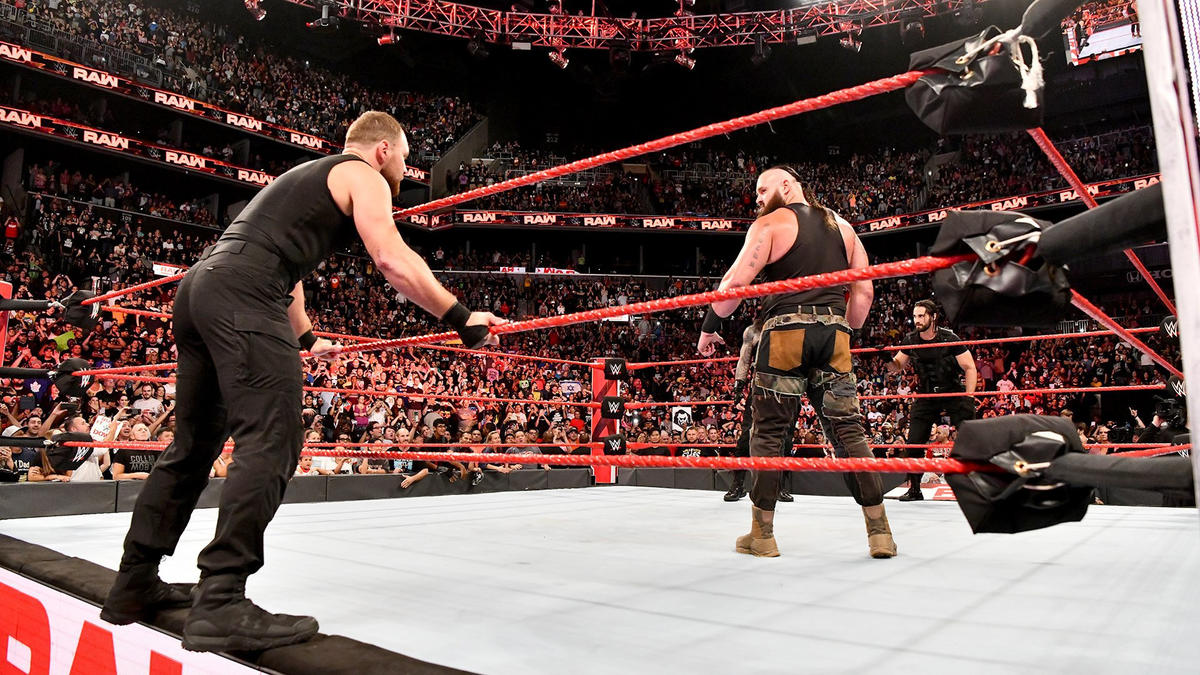 At Hell in a Cell, Roman Reigns and Braun Strowman will battle over the Universal Championship inside the ominous structure. This match also counts as Braun Strowman’s Money in the Bank cash-in. While it would be strange for WWE to have two unsuccessful Money in the Bank cash-ins in a row, it would also be weird to have Roman Reigns lose the Universal Championship so early.

Imagine that the two men beat the hell out of each other. It’s a real brutal match that ends with Roman spearing Strowman out of the cell. Also, Mick Foley falls from the top of the cage like he did 20 years ago. Anyway, Reigns pins Strowman in the middle of the ring.

Suddenly, acting general manager and all around tool Baron Corbin hits the ring and announces that he hasn’t actually cashed in Strowman’s contract. He produces the briefcase, and Reigns yells angry words at him. Then Strowman hits the Big Dog from behind and announces he is cashing in again. One powerslam later, Strowman is the new Universal Champion.

But then Corbin hits Strowman with another briefcase. He says that this is the real contract, and he’s cashing in on the Monster Among Men. He somehow lifts Braun up and hits him with the End of Days to become Universal Champion.

Reigns wins the title back the next night after spamming Superman Punches.