With the Mae Young Classic now airing on the WWE Network, 32 competitors from around the world are now having their names promoted on a massive stage. One of those competitors- former Impact Wrestling star Sienna is a competitor in the event under her name of Allysin Kay.

We reported yesterday that Kay won the Shine Championship at Shine 53. Following the event, we have learned that she competed in three different matches as part of the eight-woman tournament to crown the new Champion.

Following the release of our original article, Kay took to her Instagram account to showcase some nasty bruises she had suffered on her right arm and shoulder in several places. You can find the photo below: 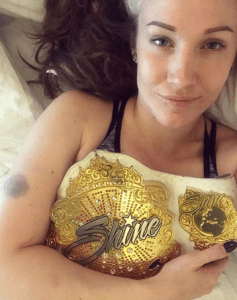 Accompanying the photo, Kay had the following comments to say in reflecting on her hard night:

“New York fans, you are #ClassyAF. I had 3 matches last night & your energy and pinkies were up every time. It’s been a long 6 years, Shine, but the Savagery has only just begun.”

The Mae Young Classic airs each Wednesday following NXT on the WWE Network. This shall continue until WWE Evolution, where the final two competitors will compete as one will be crowned the victor and will likely receive a shot at either the NXT Women’s Championship or the NXT UK Women’s Championship.

Who do you ideally want to win the Mae Young Classic? Have you watched the Shine promotion before? Let us know in the comments below.