Ross opens today’s show by speaking about his experience at last weekend’s ALL IN event. He points out that he really enjoyed himself the entire weekend, and he thought the show was amazing. He notes that the show hit huge numbers on the FITE TV app, and ProWrestlingTees sold over $500,000 in t-shirts at the event. He thinks those numbers are pretty special.

He thinks there’s been too much grief over the fact that CM Punk didn’t show up at ALL IN. He points out that we all enjoyed Punk’s work for a long time, and we should all move on now and let Punk do what he wants. Punk was never advertised for the event, and therefore we shouldn’t be too disappointed about the fact that he didn’t appear. 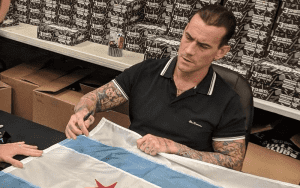 Ross points out that fans are really behind Becky Lynch right now. Much like Stone Cold Steve Austin’s rise in the late 90’s, fans can sense an organic build around Lynch’s career right now and they seem eager to be a part of that. The Smackdown’s Women’s Title match at Hell In A Cell with reportedly take place inside the cell, and Ross warns that WWE needs to be careful as to not have too many cell matches on the same show.

Ross thinks The Shield will sell a lot of merchandise now that they’ve been reunited, and he hopes that they stay together for a while because he doesn’t see any point in stopping and starting their reunion multiple times. He thinks being a part of a successful faction like The Shield will only help the individual careers of Reigns, Rollins and Ambrose.