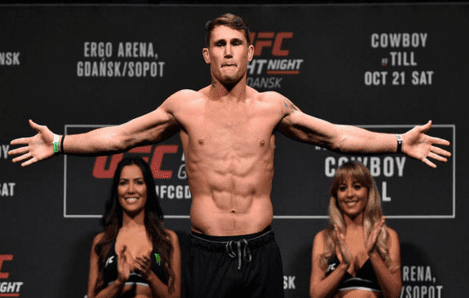 25-year old UFC star Darren Till has been dealing with a lot of negative feedback from fighters and MMA fans for missing weight on multiple occasions. With only a few days before his title bout with Tyron Woodley, it’s all The Gorilla is focused on. During media day last week in Las Vegas, Till opened up on how difficult it is for him to drop, and what a painful experience it is. However, he refuses to let a couple of mistakes define him, and is ready and willing to prove all of his haters wrong.

Thanks to CBS Sports for the transcription.

To be honest, I don’t really care. I feel like I’m the only fighter who has ever missed weight in UFC, to be honest. Anyone when we talk about weight now it’s Darren Till, Darren Till. I missed weight and people just need to get off it. I’m just focused on Friday, making 170, and then Saturday going in and absolutely f—ing destroying Tyron Woodley. That’s all I’m focusing on right now.

Till would go on to talk about his attitude and explicit personality.

Listen, what you see is what you get with me. It’s 100 percent,” Till said. “You don’t get no scripted shit. Sometimes I might say controversial stuff, but it’s all Darren Till and that’s the truth. I just want to beat everyone and have everyone in all divisions sit back and say I was the f—ing best and the greatest and I beat everyone.

I’m not scared of anyone. I don’t care whether you are a jiu-jitsu fighter or a wrestler or a stand-up fighter, I want to put myself against you and I want to see who is better. And if you are the guy that is going to beat me, I’m going to take that loss like a man and go back and I’ll work on me self. That’s how I look at fighting. I don’t look at it as going in and fighting this guy and that guy and making money. F— that, I’m not here for that.

You can see why the guy gets comparisons to Conor McGregor. He talks the talk, but can we walk the walk? In three days…we’ll find out.