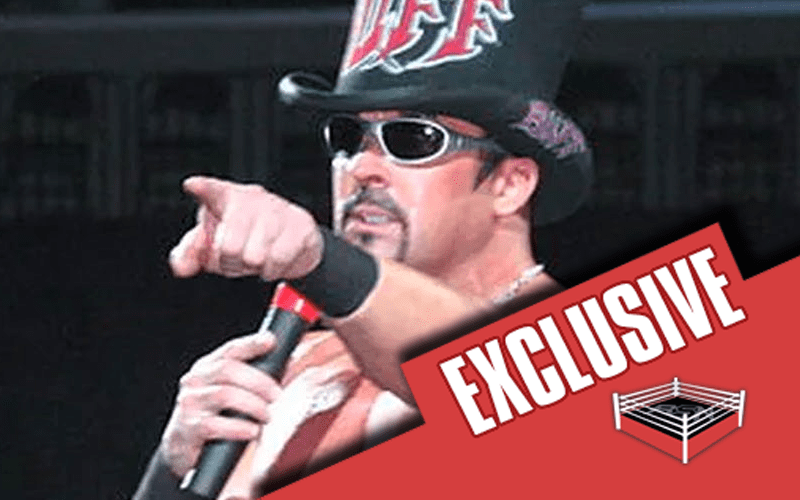 I recently sat down with former WCW/nWo star Buff Bagwell in an exclusive interview for Ringside News. Below are the highlights from the interview.

Bagwell on Dusty Rhodes hiring him: “Just to be able to sit across the desk from him when he hired me, I remember he wasn’t going to hire me that day, he’s like, “Go back to Global, finish their last couple of t.v tapings and come back.” I was just 19 and said, “Come on Dusty, please, they’re going down.” He signed me to a weekly deal to go to school. It was a foot in the door. Three days later, Barry Windham blows his knee out and I’m on the road. Twenty-nine years later, here I am. Dusty and Dustin played an intricate part in forming Marcus Alexander Bagwell. Dusty hired me, Dust took me in. Dustin was close to my age so he helped me out a lot.”

Who trained Buff Bagwell: “It was North Georgia Wrestling with Sammy Kent, Joe Pedicino, and Bonnie Blackstone, that’s where I started as Fabulous Fabin. So Steve “The Brawler Lawler” trained me, but it was Dusty who hired me 29 years ago.”

Bagwell on being a five-time, five-time, five-time WCW tag team champion with four different partners and tag teaming in general: “It’s hard to adapt. Lex Luger does not wrestle like 2 Cold Scorpio, 2 Cold Scorpio and Scotty Riggs aren’t even close, Luger and those guys, they’re not even close. I think it helped me become a better wrestler because I had to adapt to make the team work. I mean, Lex Luger was Lex Luger no matter what, so I had to adapt to the likes of a Lex Luger. It worked out great.

All of them have such great memories, I think the most memorable is me and Steiner as Big Poppa Pump. I think ultimately just because of the name, Vicious & Delicious was the coolest. That was the very beginning of the nWo. The only reason I didn’t stay with him (Scott Norton), was because I broke my neck with him in a match against Rick Steiner & Lex Luger. When I came back from that injury, Scott Norton was in Japan, so they put me with Steiner. That name was just so cool.”

Who came up with the Vicious & Delicious name:“A little kid came up with the name at like an Applebee’s sort of place. We were having dinner somewhere in Chicago. I remember the city was Chicago. This little kid comes up and at me and Scott Norton and he went, “Vicious and delicious.” I go, “What did you say?” I instantly wrote it down. We went straight home and airbrushed everything. Mine was all delicious and his was all vicious, and it worked.”

Bagwell on never holding tag team gold with Scott Steiner or Scott Norton: “With Norton, it was right when we got going, pow, I broke my neck. When we actually created the Vicious and Delicious there wasn’t a whole lot of time there before I broke my neck and was out ten months. I was off TV for three, but I was out of the ring for ten.

Steiner and I never won a title, and I don’t know what it was. I think there wasn’t a whole lot of great tag teams when I was coming up with WCW. So I think they put me over there because there was nowhere to put guys, and all of a sudden, tag team wrestling pretty cool and I was part of that wave of it.

Your tag team match should be the best part of the card I think. There’s five people that have to work together, not including managers. You have the ref and four wrestlers. That’s five guys that have to be on the same page to pull a complete match off without messing it up, performing and doing it right and having a good snug match.”

(When using any quotes from this article, make sure you credit Lee Walker III & Ringside News)