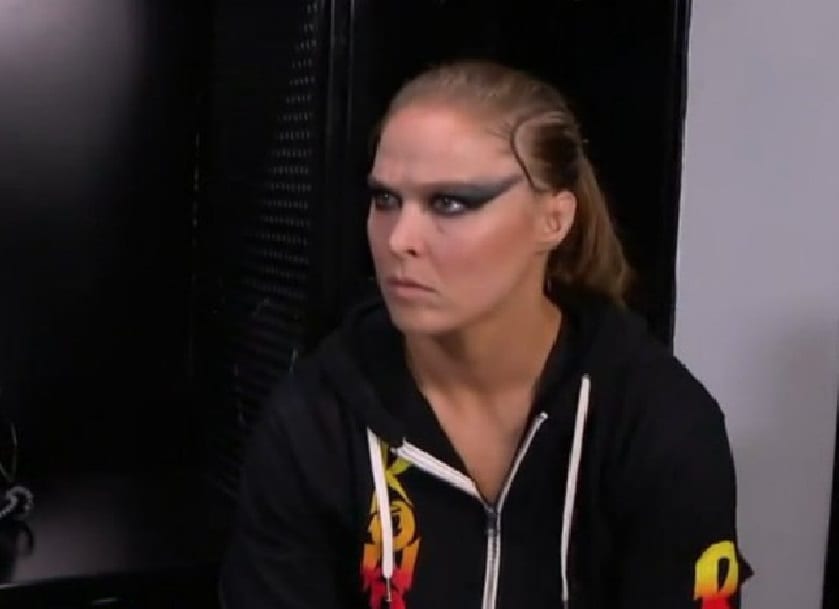 We’re not sure what kind of look Ronda Rousey was looking for, and maybe she’s got some kind of ring attire planned to tie everything together. But as soon as WWE showed Ronda Rousey sitting in the locker room during the kickoff show, the internet exploded with comments.

People were not only comparing Rousey’s look to Sensational Sherri, Black Swan, Mr. Fuji, or Nightman from It’s Always Sunny In Philadelphia, but they had a slew of other things to say as well. Almost immediately, “Ronda Rousey makeup” started trending on social media with tons of comments flooding Wrestling Twitter.

This isn’t the first time Rousey has made a bold decision for her makeup before, and there is always time to change things around, but at this moment, some fans are questioning the creative decisions in the makeup chair backstage.

I thought of Sensational Sherri when I saw @RondaRousey’s makeup for tonight 😊 #SummerSlam pic.twitter.com/yHy9SODoVn

Twitter has conveniently pointed out that Ronda Rousey’s #SummerSlam makeup looks like The Nightman from It’s Always Sunny in Philadelphia. I was thinking Black Swan but this is much better. pic.twitter.com/DqakDdslOi