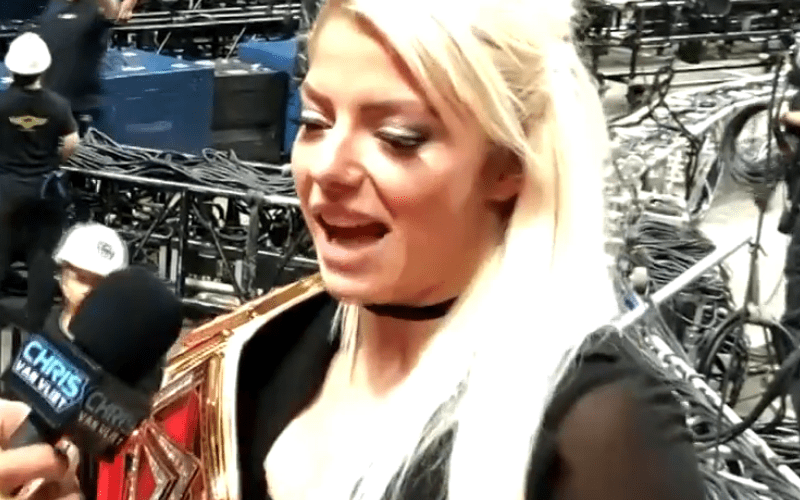 In the lead-up to her RAW Women’s Championship title defense this Sunday against Ronda Rousey, Alexa Bliss spoke with Bleacher Report to confirm which of her promos is her favorite and where she gained the skills to be so confident with the microphone.

Bliss first confirmed what promo she feels elevated her character to another level. According to the RAW Superstar, she feels either her ‘You deserve it!’ chant promo or the Elimination Chamber victory promo was the best in her career, and as such, is her favorite as they demonstrate so much character.

“The Bayley “This Is Your Life” segment! No, I’m kidding. I’m totally kidding. I get a lot of flak for that. When I had the Raw Women’s Championship, I made the crowd chant, ‘You deserve it!’ I was told that was one of my better ‘interacting with the crowd’ promos. And I was told that by Paul Heyman, who told me that I lured the [audience] in and took them on a ride. Also, there was the Elimination Chamber promo, where I cried after winning the match and then turned on the crowd. That was a diverse promo where I was able to show a range. It was really cool to have a real emotional moment and then to have to snap back into character. That was probably my favorite promo, personally.”

She also confirms where she gained the skills to speak so confidently on the microphone from.

“I attribute them to the NXT promo classes. I wasn’t used to performing and speaking, and after my first promo class, I was so upset and nervous that I cried. But William Regal always said that if I’m not comfortable with something, I should put myself into that uncomfortable situation to beat it. That’s one thing that I’ve always taken with me. Once, I was never able to speak in front of more than three or four people. Now, I feel at home. I love doing the in-ring promos more than doing the backstage promos because I love being able to interact with the crowd. That’s where I found my passion. Obviously, wrestling is a lot of fun, and I love it. But on the mic is where I have the most fun.”

What is your favorite Bliss promo? Do you believe she is one of the best right now? Sound off in the comments below.