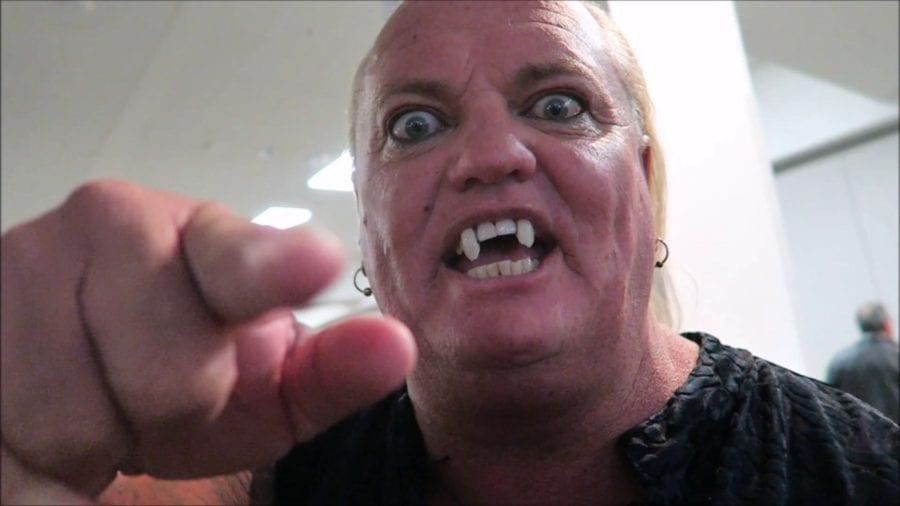 The former Brood leader and vampire extraordinaire spoke with Chair Shots to the Cranium about his glory days working in the WWE and his current project, the Gangrel Wrestling Asylum, where he is training a future of indie wrestlers. While sharing stories, Gangrel reminds the listeners that he still gains recognition from fighting Geoffrey the Giraffe, and that one time he sprayed the now President of the United States with fake blood at Madison Square Garden.

The Donald Trump thing, it was a rib and Vince [McMahon’s] plan,” Gangrel said. “I wasn’t even on the show at The Garden and all of a sudden, they called me at home and said, ‘Vince wants you at The Garden show.’ It’s last-second, you know I was all excited, I had always dreamed of wrestling at Madison Square Garden with WWE. I mean, The Garden is such a great venue.

So I was stoked and I get there and I see I’m a special attraction with Kane. I go, ‘wow, I don’t know why they really needed me. I’m just going to be chokeslammed in three minutes and be done, but whatever, it’s cool. It’s The Garden. I go out to the ring and I see someone and say to myself, ‘that guy doesn’t really fit here,’ but I got the sunglasses on and the red lights are going and the energy’s going so I pretty much rush through it. I go up the steps and I can hear the people really getting behind me. I’m like, ‘Woah, this is cool. I’m over in The Garden.’ I start drinking [from the goblet filled with stage blood] and the deeper I kept drinking, the louder it got. I spray [the fake blood] and it roars so I’m guessing this whole time I was drinking down, people were trying to pull Donald Trump back, but he didn’t want to be touched so MSG security were pushing themselves against the guardrail. So they’re trying to push him even further away and I didn’t see them and I just spray as hard as I ever could spray.

I was super scared I was going to get in trouble. Stephanie told me, ‘my dad’s upset, Trump is his friend.’ She wound me up for like a day and a half or something and it turns out Vince set that whole thing up. He double-ribbed all of us.

Now if only he could make this happen again. Check out the full interview here.