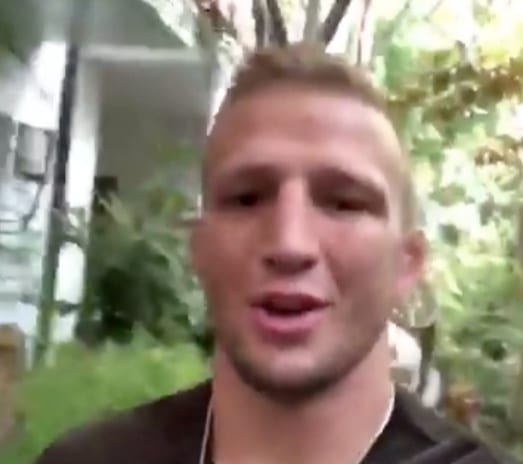 UFC Bantamweight Champion TJ Dillashaw has stepped up his pursuit of a fight against boxing sensation Gervonta Davis, officially challenging him over social media.

Dillashaw, 32, is coming off the back of his second straight finish of bitter rival Cody Garbrandt – which is a performance that the aforementioned Davis seems to have taken notice of. The 20-0 star, who fought on the undercard of Floyd Mayweather vs Conor McGregor last August, hinted on Twitter that he was interested in fighting someone that matched the description of Dillashaw.

This peaked TJ’s interest, and thus began a back and forth between the two champions. Now, however, Dillashaw seems to have laid down an official challenge as seen in the video below.

Gervonta Davis what’s up my man. I catch you talking s*** online, without tagging me, and then I call you out, and now you wanna act like it’s not even me you’re talking to? Man, it’s just pathetic. Let’s get this done – I’m ready. Bring it.

Next time think before you call someone out @Gervontaa . Yes it’s been me the entire time. pic.twitter.com/Ij1YX5QXAb

Dillashaw has been presented with a number of options regarding who he will fight next, and not by the UFC, but by the fans. The likes of Dominick Cruz, Henry Cejudo and Marlon Moraes have been suggested as potential opponents for the man that they call ‘Killashaw’, although the fight against Davis seems to be what is interesting TJ the most right now.

Dillashaw’s victory over Cody Garbrandt came in the main event of the UFC 227 pay-per-view, which took place in Los Angeles. It was his fourth straight win, with his last defeat coming at the hands of Cruz back in January 2016.