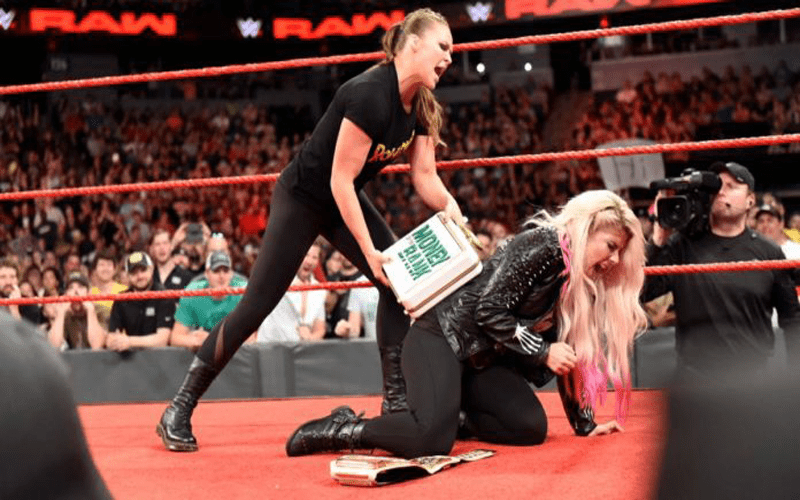 RAW Women’s Champion Alexa Bliss is currently scheduled to face off against UFC Hall of Famer Ronda Rousey at SummerSlam for the coveted Championship Bliss drapes over her shoulder.

On-screen, Bliss and Rousey are enemies. Ever since arriving in WWE, it is clear Rousey’s character has not been a fan of Bliss. Back at Money In The Bank, RAW Women’s Champion Nia Jax took on Rousey, with Bliss getting involved to cost Rousey the title. Bliss cashed in her Money In The Bank contract she had won earlier that night on Jax, winning the Championship.

While on the Cheap Seats podcast, “Little Miss Bliss” confirmed what she truly thinks of her SummerSlam challenger out-of-character.

“I am absolutely impressed. She does really well at her facial expressions, which I appreciate because I am really big on facial expressions. It is really easy to appreciate the fact that you know she has been hit before, and you know that pain, you have that emotional connection to her one way or another when you watch her perform.

“I was very impressed with her match against Nia Jax, and also her match at WrestleMania with Stephanie McMahon and Triple H, it was just awesome. I am very proud of her and it’ll be fun to see where things go with that.”

It seems Bliss has the opinion many have of Rousey- which is that she has been doing better than initially expected since coming to WWE.

What is your opinion of both Bliss and Rousey? Who do you predict wins at SummerSlam between the two? Sound off in the comments below.