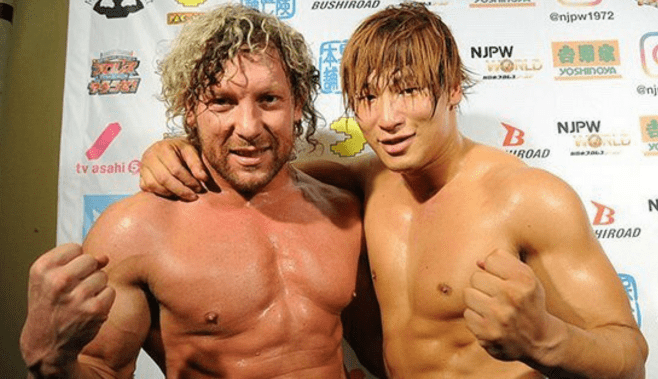 The Cleaner and current IWGP Heavyweight Champion is already off to a running start at this year’s G1 Climax, picking up wins against Tetsuya Naito and Hirooki Goto in his first two matchups of the tournament. One exciting aspect of the G1 is that all the matches are announced prior, building anticipation for bouts down the line when points matter most. This happened last year when Omega versus Okada III was scheduled for the final day of the tournament.

This year, Omega is in the same block as his Golden Lover comrade Kota Ibushi. Regardless of where the points are at, a victory over Kenny could secure a future title shot for Kota, and possibly drive a wedge in between their reunited relationship. It could also bring them closer together, as competition in New Japan always seem to do.

Meanwhile, Omega was the latest guest on the Jim Ross Report where he discusses the eventual showdown with Ibushi, and other talent he looks forward to eventually working with on the NJPW roster.

Sort of the match that everyone is looking forward to, and it’s going to happen because they’ve announced it for the G1 is the match with Ibushi, and I’m sort of really chomping at the bit to show everyone what Ibushi is really capable of. A lot of people do know what he can do, but I don’t think he has shown it in the newest form of his. I think he’s really ready to take the ball and kind of step into the league of four or five top guys that could headline any show for New Japan. And I think this G1 performance is kind of the perfect way to display that he’s one of those individuals. So Ibushi is one of them for sure.

I only ever get to work with Naito once a year. I’d love to wrestle him again. Yeah, he’s good for sure. The person I’ve never worked before in a New Japan ring and I’d be happy to get the chance and show the difference of styles is Zack Sabre, Jr., so that’d be another one. Yeah, he’s one of my favorites. Yeah, for sure [ZSJ has it factor]. And I may be speaking a little premature, but I think of Hiromu as a guy that could possibly graduate from being a junior heavyweight and move onto other things just due to the fact that his charisma is too huge to be contained in just one division. I think he could do more than what he’s doing right now and I think they really need to capture that lightning in the bottle with that rather than keep him chained down so to speak.

And yeah, for me, original, ‘you can’t see them everyday’ moments are important to me, so I’d say, I’d even like to show what I can do with a guy like Will Ospreay or working with Rey Mysterio, Jr. That’s another guy I’d love to show sort of that style of match. I really think our styles could work well together.