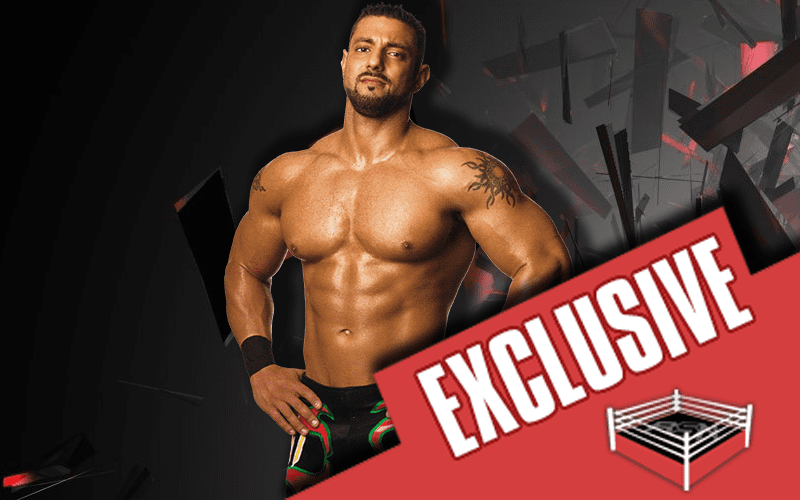 I recently had an over the phone interview with former WWE supterstar Muhammad Hassan exclusively for Ringside News. Below are some of the highlights of the interview.

“I started in 2002 and I think I won the title in 2004. I had wrestled some house shows for OVW and on the indies out of Kentucky, Tennessee, and Ohio for about a year before they put the title on me. I was still working at Chili’s when I won the title. I wasn’t one of the WWE contracted guys. It was really cool. I won it from Johnny Jeter I believe, (I checked to make sure, he indeed won the title from Jeter). He was actually my best friend down there, we were roommates. I think we had a really good match, and we were really excited about that. I think I held it for four-five months. I lost it to him and Nick Dinsmore, who was one of my trainers, in a double pin. They both pinned me.

I remember after I won (the title), I went backstage. I was a little overwhelmed so I went to a little side room to catch my breath and take a minute. Mike Bucci, who played Nova (ECW), Simon Dean (WWE), I’ll never forget he came back there, congratulated me, and told me, “You earned this. There were plenty of times you could have packed up and went home and walked away, but you didn’t and hung with it.” He told me he was proud of me. That was a big moment for me because everybody, and still do respected Mike. It was definitely one of the highlights of my career winning that title.”

On working with Jim Cornette

“It’s great working with Jimmy. He’s very intense, he’s very passionate about what he does. He’s very big into the old school wrestling, the psychology of it, what makes sense, but more importantly what the crowd will buy, what it’ll get them to react and have them enjoy the show. He’s probably forgotten more about wrestling than anybody else even knows.

Jimmy was great to work with. When you’re one of his guys, he treats you like family, he looks out for you, he tells you how it is. I have a great relationship with him. I saw him a couple years ago. It was great just to see him and talk again. We talked about old times and some recent stuff. He was awesome. He’s one of the greatest wrestling minds I’ve ever worked with.”

“I don’t think Shawn (Daivari) and I, well maybe Shawn knew, but I don’t think I realized how big of a deal it was. I was aware that not every guy who comes up starts to work the top guys. It was also new to me, it’s very intensive. a lot of it was just everyday survival, trying to stay on top of our game, and still try to improve.

Working with those guys, I mean, there’s no better way to learn. Working with Chris Benoit, Chris Jericho, Shawn Micheals, I mean, Chris Jericho, Shawn Micheals are some of the more gifted technical wrestlers. Chris is still wrestling and Shawn is coaching for WWE now. It was amazing working with them, and I learned so much. It made my life easy. If I had good matches, I credit those guys for why, their ability to lead in the ring, and to teach me as I was learning.”

“We were aware that the angle was going to lead to Hogan and Micheals and we were fortunate enough to be part of that. It was a great match, a packed house I still remember. Triple H and Batista were the main event that night. We did our job that night on that show as setting up that feud. I can’t describe what is was like being in the ring with the both of them. I had worked with Shawn (Micheals) a few times, and I worked with Hogan a handful of times. They’re easy to work and we had a lot of fun doing it. They’re both legends from different ends of the field coming together for a dream match. I’m just fortunate and happy I got to be part of it.”

“You never really think of it as a title match unless you’re going to win I guess. You just look at it as a match. Our job was to go out there and entertain and put on a show. It’s great to work with all those guys (Eric Bishoff, Stone Cold Steve Austin, Shelton Benjamin, Batista).

To be in a top spot at such a young age, I think Randy is a little younger than me though. I’ll have to check the math on that though, maybe I’m wrong. As far as winning the title, I know they were throwing it around, I don’t know if it was something they decided on it yet. That was one of the plans was to beat Batista, ya know giving the Arabs half new to the United States and beat the hometown town boy in Washington D.C.

I did win the Intercontinental Title from Shelton Benjamin for about three seconds until Stone Cold overturned it. I don’t know if that’s in the books or not, but I count it.”

“It was great working with John. I had known John in OVW. When I first started there, John is obviously very dedicated, very hard worker. He would come in extra nights to the old arena of OVW in Jeffersonville to work out and practice. So Jeter and I, a few other guys would go. He, Shelton Benjamin, Matt Morgan, we’d all be there tackling dummies so to speak. So I had known him from OVW and it was cool, I mean, he was already on his way to being one of the biggest stars. It was great to work with him.

Our match got cut short, so it was a little quicker than I had wanted. We were supposed to be out there for nine minutes and I think it got short to like four. It was a condensed version. That seems to be the match that everyone remembers at work by all the kids is that I got my butt kicked by John Cena. It’s hard to explain to them that it wasn’t scripted that way. We were supposed to have more time, but when you get cut you go right to the finish, and that was the finish. It was cool to work with him, it was great to share the ring with him. To do promos with him was fun too because John is very smart, very gifted speaker. I know that we went back and forth just on our toes so that was fun too.”

Hassan on working with The Undertaker

“It was amazing. When he came out for his entrance at The Great American Bash, it was full pay per view entrance with the smoke and the lights. I still remember being scared and I know this guy, I’ve worked with him before. He’s great to work too. He’s cut from the same cloth as like a Shawn Micheals, just very calm, very relaxed in the ring. He knows what he’s doing, he knows how to take care of you and lead the match and tell you what to do, but at the same time, he’s not as athletic as Shawn, he’s a giant so there very different matches that I was used to.

I usually worked smaller guys where we could do some more athletic stuff, so it was him breaking it down and just attacking a leg and doing some more technical elements in the ring, but as far as everything else, he was great to work with. He is who he is for a reason. He’s the leader of the locker room for a reason. It was fun, it was just awesome. My first ever appearance in WWE was a dark match in Louisville where I ran out and was still part of the Revolution in OVW, and he gave me The Last Ride. My last ever appearance in WWE was Great American Bash in Buffalo where he gave me The Last Ride through the stage. So even if it was just getting my butt kicked by him, I’m honored to share the ring with him.”

On his return to pro-wrestling, an autograph signing at Heroes Hideout, Wrestling at Dynasty, when he’ll be back in the ring

“I’m not sure. I’m not booking any in-ring appearances right now. I’m open to doing in the ring promos, autograph signings. I was actually talking to Nick Dinsmore yesterday. He wants to come out at the end of September to his promotion Midwest All Pro Wrestling in South Dakota for an autograph signing and in-ring promo. As far as wrestling, it’s just difficult with my schedule. I have a regular full-time job, and the travel is difficult with my family as well.


I’m open to doing seminars, autograph signings, conventions. If anybody needs to book me those or wants to book me for those, they can reach me on my Facebook messenger at Marc Copani.


It was fun to get back in there and wrestle for Dynasty. It’s a great group of guys. It was great working Bin Hamin. I just wanted to get in to see if I could do it, and I don’t have any long-term plans for a comeback. It was just a lot of fun, I’m glad I got to do it and they were great for giving me the opportunity.

I might make a few more appearances. I might end up back there, I might end up somewhere else just to wrestle a show. It’s something that was a big part of my life for a long time. I put it on the shelf for the last thirteen years. If I can get in and have some fun, roll around in front of a crowd I definitely would. Like I said it’s just a matter of convenience to travel and get away from my job.”

If he ever played as himself in any WWE video games

“I’m not a big video game guy, but I remember when Chris Masters and myself both used to live in Los Angeles, there were a couple nights playing, having fun versing each other in the game but neither of us was really good so we just used to banging our heads into the cage over and over again.”