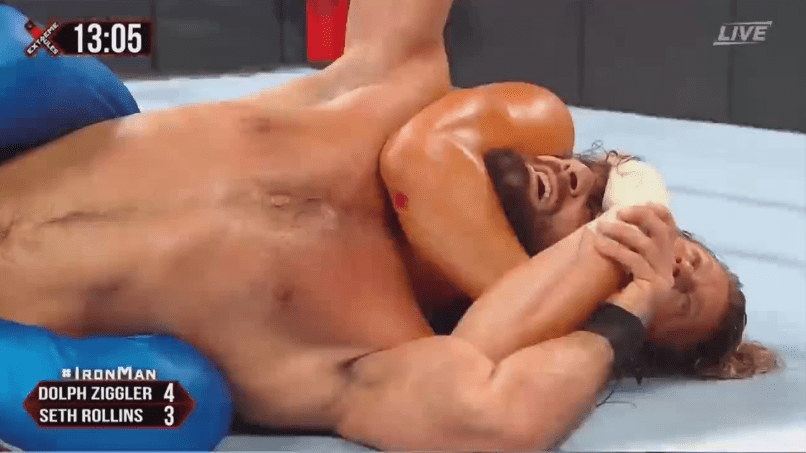 The finale of WWE’s Extreme Rules saw Dolph Ziggler retain his Intercontinental Championship against a game Seth Rollins in a very wild affair. Tied at 4-4 at the 30-minute limit, the Architect and the Show-Off went to sudden death to determine a winner. Several seconds later, Dolph would steal the victory thanks to interference from his Scottish comrade Drew McIntyre.

However, the big story of this match was the raucous Pittsburgh crowd. As the match began WWE included the clock to countdown the time of the Ironman match limit. The fans in attendance (for some reason) took that as an opportunity to count down the last 10 seconds of every minute similar to the Royal Rumble, and even added a buzzer sound effect. It was amusing the first time.

It got so bad that they decided to pull the clock of the big screen in an effort to derail the crowd’s chants. This made the situation much worse as the crowd grew even more hostile, begging for the clock to return. Bryan Alvarez from Figure Four Online claims that fans were pulling out their phones to watch on the network so they could continue the countdown.

Suffice to say…Dolph and Seth seemed displeased with Pittsburgh’s reaction. Here’s audio of them mid-match talking about it during a rest hold.

It’s a little tough to make out, but it goes like this:

DOLPH: “It’s worse than when the clock was here.”

SETH: “That’s why they should have left it up.”

WWE would eventually give in to the crowds demands.

They put the clock back and the place went nuts. #ExtremeRules

Rollins didn’t take long to make his own comment on the incident.

WWE has another scheduled event for the PPG arena later this year. We’ll release more on this story as it comes.