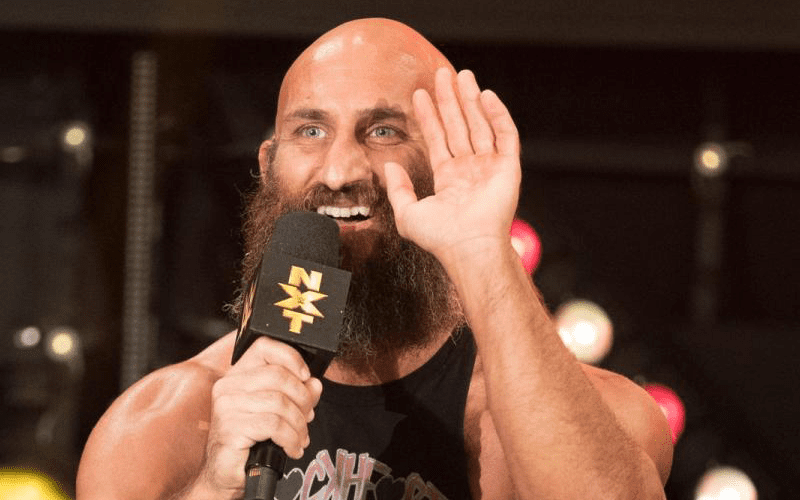 Tommaso Ciampa has been consistently improving in every aspect of his character due to his seemingly ongoing feud with Johnny Gargano. After what transpired at NXT TakeOver: Chicago, it seems Ciampa is ready to move along with his life, now focusing on the NXT Champion Aleister Black.

Last night on NXT, the battle lines were drawn between Black and Ciampa, as Ciampa interfered during a promo by the Champion. Ciampa put himself over by referencing the fact that he and Gargano main evented the past two TakeOver shows and Black was an afterthought.

To anyone paying attention to Ciampa’s Twitter account, you’d have realized he has been taking aim at the Champion ever since defeating Gargano. After the tapings, Ciampa immediately took to Twitter to share his intentions of becoming NXT Champion. For anyone familiar with the spoilers, this was obviously referencing what transpired.

Everything kicked off on Twitter on June 18, when Ciampa tweeted out a photo of two characters from the video game franchise “God of War.” The image depicted characters resembling Black and Ciampa, as Ciampa appeared to choke out Black.

On June 24, he followed this up with the same claim he made during NXT last night. He only needs one opportunity, one title match and one moment to force Black to fade to black.

Yesterday before NXT aired, Ciampa would again take to Twitter to continue beating down his point on Black. He reminded everyone that, once again, he had main evented TakeOver while Black had not. He implies that if he were to face Black, they’d main event together.

Finally, his latest tweet, which followed NXT, would revert back to the “God of War” video game series, as she shows an animated gif of the Ciampa character blocking a punch from the character resembling Black, claiming he is coming for him.

It is yet to be confirmed whether or not Ciampa will be facing Black for the Championship at any point, but Black does not seem to have any other notable challenges, besides a potential Ricochet.

Would you like to see this match take place at TakeOver? Would you rather see Gargano vs. Ciampa III? Sound off in the comments below.