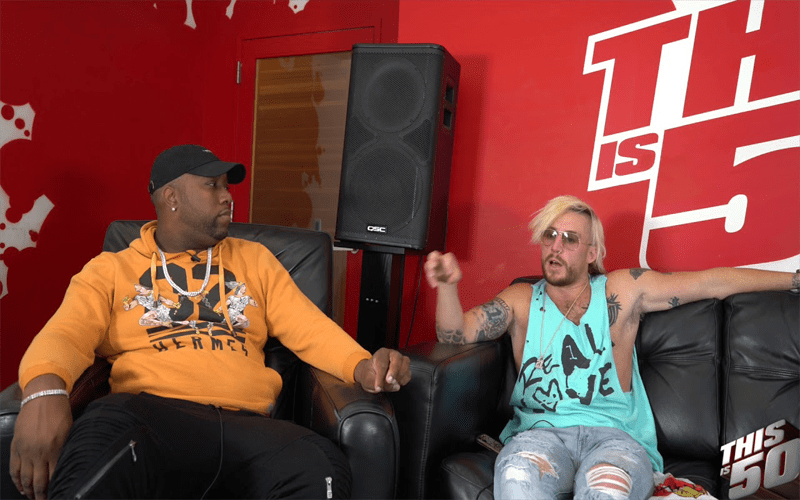 With the rape allegations towards former WWE Superstar Enzo Amore now seemingly cleared, there is a lot the former WWE Cruiserweight Champion wants to get off his chest.

Amore recently sat down on This Is 50, where the rapper explained in detail how the allegations from Philomena Sheahan affected him, without naming her directly. He also referenced his WWE departure, which coincided with Raw’s 25-year anniversary show.

You can find his comments in detail below.

“You want me to introduce the elephant in the room? Here’s what I have to say about the elephant in the room. The king of the jungle was a fu**ing lion. Not an elephant. Welcome to the fu**ing jungle, brother. Moving on. Dust under the rug. I squashed that sh*t in Phoenix. So, if we ever wanna talk about victims, real victims, awareness for those victims, the good things that the #MeToo movement has done, the issues that exist in society on levels that, y’know, surround- Bro, we have real issues, okay. In our country. To ever make light or to foreshadow or throw shade on some of the most heinous acts that one can commit in all of humankind. To use it as a ploy for fifteen minutes of fame, the pendulum should swing both ways but unfortunately, it doesn’t always. In a society that deems people guilty till proven innocent, I’m not a victim. I put myself in that situation. I’m a huge Red Hot Chilli Peppers fan. I went to a Red Hot Chilli Peppers concert, had a bit too much to drink. You meet people at face value all the time in life. Make no mistake about it, when you’re on the road Friday, Saturday, Sunday, Monday, Tuesday, on the road 300 days a year, you have to a certain type of person. One thing I can say about the WWE is to make it to that level, I can’t look around the locker room and really point out one bad, really sh***y person. Because to make it to that level, you would have had [a lot] and succumb to a lot of pressures and beaten a lot of odds to get to that point.”

“I’m not a victim. I’m not going to sit here and be like ‘Oh, this girl. What she did to me,’ man I addressed that in Pheonix and I wrote that song and videotaped that a month after this happened. So I mean, it’s been water under the bridge. Dust settles. I’m not worried about it, in a sense that I said ‘I have an opportunity of a lifetime that I didn’t ask for,’ I didn’t ask for it, but that is to make a real difference and a real change and help people who are real victims. Especially children, who have been abused. To spread the word on those evils, and to provide good-hearted, real change in those environments. That is something that we can talk about.”

“I’m not gonna continue this person’s name, or even give them that. Like, give me a break. That person should be in jail. The only problem I have within society is where you hashtag things like guilty until proven innocent because its a real thing. The only things that I have to say that are bad about that… The only bad part about the situation that’s out there with guilty until proven innocent, people formulating their own opinions and expressing them as if they are law is that they’re also allowing it to happen. It is mind boggling and mind-blowing to me.”

“I’m no saint, okay? I’m like anybody else. I make mistakes in life and I will continue to. And this probably won’t be my first hiccup. I don’t know. I just don’t know what the future holds. But the same people like this human that accused me of this, that I made- I got myself there. But when someone that invokes an extreme lack of credibility in all of their answers and responses and, the manipulation of using media as a marketing tool, hashtagging #MeToo to get your voice heard these are the same people that are buying guns and shooting up schools, and shooting people up all over our country. And you’re letting them do it because you’re watching it as a society.”

“When a person stands on TMZ and goes, ‘Oh he took me from behind. Oh, I understand why he r**ed me, I’m a hot b*tch.’ When you hear that as a society, and you still sensationalize, exaggerate your headlines and use fake news as a ploy to create double clicks and double clicks and double clicks- clickbait across the world. I was clickbait. When TMZ comes out with a story after watching my accuser say those things with these people out there who have actually been through this, that are going through this stuff, they’re really hurting. For you to watch that accuser make such light of the situation and then to air it, you get the clickbait and advertisers. That’s all it is. And I knew that! I was in the business of propaganda!”

“Wrestling isn’t real. The falls hurt, sometimes you get punched in the face. But it’s not real. It’s propaganda. Propaganda makes you the giant and makes me the small guy. Propaganda makes me the Champion and makes you unworthy of a title shot. I was in the business of marketing, right? I have two bachelor degrees in political journalism and I wrote for the school newspaper for some time. So I understand that, you know, the New York Journal was purchased by Joseph Pulitzer and due to an article was written and printed that depicted Teddy Rosevelt as the hero on San Juan Hill and didn’t mention all the real heroes, the Buffalo Soldiers, who were killed and blood spilled. He even rolled up on the hill and the Buffalo Soldiers, all these black guys won the battle but were never mentioned in the newspaper. Teddy Roosevelt goes on to be elected president.”

You can check out the interview below.

(If any of the above news is used, please credit Ringside News for the story.)