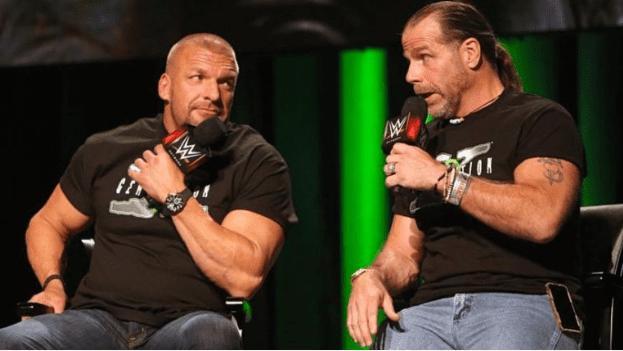 The Heartbreak Kid has been making the rounds for years saying that his retirement match with the Deadman at WrestleMania 26 was the last time he’ll ever lace up his boots. Even the prospect of A.J. Styles joining the company, or Daniel Bryan returning from action weren’t enough to spark the Showstopper’s decision. Now, according to his very good friend Triple H, that may have all changed.

The Game spoke with Sky Sports regarding Michael’s time as a trainer at the reclaimed WWE Performance Center. The time Shawn has spent helping younger talent is apparently the driving force in him considering one more match.

I think being involved with the Performance Center [and] NXT, there’s something about these young guys and girls being hungry and there’s this drive and desire that reinvigorates everybody that goes down there.

Especially guys who have been in the business a long time say being around them relights their fire and the passion you have for this when you first start.

I think that’s where he is and what has made him think differently about this.

Hunter goes on to say that no matter what Shawn decides, it’s really cool how involved he wants to be with the yellow and black “developmental” brand.