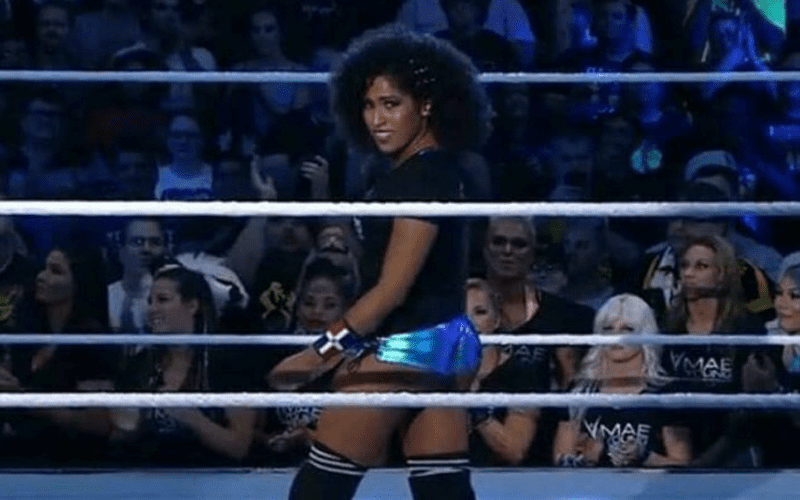 Former Impact Wrestling Knockout and Mae Young Classic competitor Marti Belle was interviewed by Women’s Pro Wrestling Weekly, where she revealed how working the WWE event has changed her career in the wrestling industry.

In the Mae Young Classic, Belle faced off against Rachel Evers in the first round, unfortunately coming up short. This also subsequently led to her having further small-scale matches with WWE, making a name for herself.

Talking to Women’s Pro Wrestling Weekly, Belle commented on how life has been since she participated in the event.

“For the last year and a half I am based out in Kansas City, Missouri I was working mainly exclusive for a company called NWL [National Wrasslin League]. They give me permission to work for companies like SHIMMER Wrestling, and obviously, when WWE came calling for the Mae Young Classic last year they were all about it and allowed me to go work for WWE doing the Mae Young Classic. It was such a crazy honor, honestly, if they wouldn’t have let me go I would have asked out of my contract anyways. It was great. The response has been amazing. I didn’t make it as far as I wanted to in the tournament but it was an amazing experience.

I got to represent the Dominican Republic—not just in front of millions of people, but in a WWE ring, which was very important to me. I think anyone who saw how much that meant to me, it was just an insane experience. I have definitely been trying to keep working. Now that the company I was working for is no longer active I am back on the indie scene. Right after the company closed I was back in Shimmer the next day, so that was pretty awesome. Shimmer has always been good to me. It’s great to be able to go work at places I used to work at. I am working all over the midwest, which I never thought I would be doing being from New York. I never thought I would be wrestling in Iowa, but here I am. It is pretty awesome the doors that have been open and that I have been able to kick in because of it.”

During the Mae Young Classic, Belle made a big deal about representing both herself and the Dominican Republic, which she was proud to do. She commented on having to experience racism in professional wrestling.

“Thankfully, a lot of things have changed. Not only for people of color but women of color. I think we are starting to make our mark more and more, not only in this industry but every industry. It is hard because if something has happened because of my race, or because of how I have looked it hasn’t been said to me. There might have been opportunities that I haven’t gotten because of that. I know that there is this one promotion that I have tried to work for in another country—I won’t mention who it is, but I have tried working for them in the past and I finally reached out to one of my friends and since I know they work for that company I asked him what the deal is because they haven’t reached back to me, and he said that they only bring in white girls with big boobs so I guess that is not happening.

I don’t get offended by that, but if you are going to limit yourself to that it is what it is. Even with the hair comment, I get people who tell me that I should straighten my hair, but I tell them that I don’t want to. I have done it before, and I am not against doing it. I mean, I am not my hair; I am not my skin color, and I am not even my gender, I am who I am, so I don’t think I should gain or lose opportunities because of how I look, it should be what I bring to the table.”

Finally, Belle listed her goals for the future in professional wrestling.

“I believe everyone’s goal is to not only make money in professional wrestling but make a living doing it. At the end of the day, we all want to say that we all live good, comfortable lives, and be able to start a family because of wrestling. I think that is really just my goal. I got so used to working full time as a wrestler, which was what I was doing when working for NWL, that is something that I want to get back to knowing that I don’t have to worry about having enough bookings. I want to be able to feel like if you are going to book me I am already booked, you would have to get in right now because I don’t know what would happen in a few months. That is my main goal—I want to be wrestling full time.”