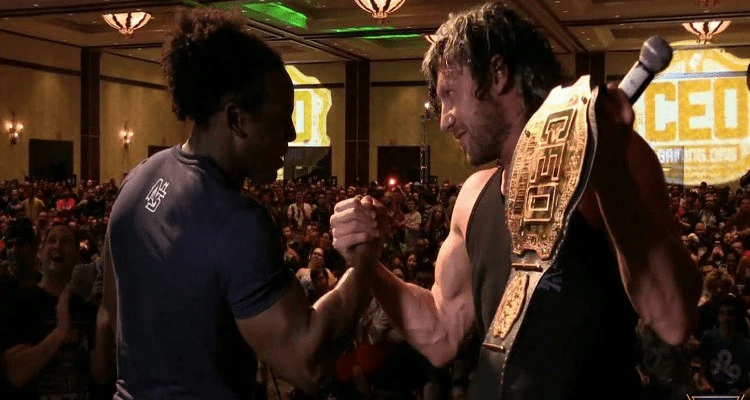 SmackDown Live Superstar Xavier Woods is now set to face New Japan Pro Wrestling star Kenny Omega in a Street Fighter showdown at E3. The two rivals will battle in a rubber match to determine which player is truly elite.

Back in 2016 during the CEO gaming event, Woods, real name Austin “Creed” Watson, showed up as Omega was commentating. The two would take part in a battle for the ages, with Omega leaving victorious.

In 2017 during the next CEO event, Woods pursued Omega for a rematch. He found the former IWGP United States Champion in his room with his Street Fighter Championship title from the year prior and challenged him. This time, Omega wasn’t so lucky. Woods left victorious, evening out the score.

It is now time for the true Champion to be determined, as Omega and Woods battle it out in the rubber match at the Capcom E3 booth on Thursday, June 14.

This rivalry was renewed just recently on Twitter, as Omega showcased his incredible Street Fighter skills off, tagging and instigating Woods. The attached video to his tweet showcases what you can expect from the NJPW star this coming week.

Love winding down with some of my own sick #SFV clips. The patience, the intelligence, the clutch. I work hard to wax my super diamonds. You think you can compete with a technician like this, @XavierWoodsPhD ?!?! Absolute mastery – it’s no wonder I beat Tokido. pic.twitter.com/yElx18xrjq

This obviously prompted the former WWE Tag Team Champion to respond on Twitter. Tired of the gloating by Omega, Woods suggested the two meet somewhere to battle it out and ensure one person is decided as the final winner.

Patience, intelligence, clutch?! A @StreetFighter technician?!? Kenneth what are you talking about?!? You literally just held V-Trigger to win this🙄 Im beyond tired of your empty gloating! How about this, I get on a plane, you do the same, meet me somewhere so we can end this 😡 https://t.co/5clTgtn2R9

With this, Omega asked Woods to name a time and place so the two can meet.

Name a time and a place, Creed! (when you aren’t being a shill for every game that’s ever released just to bump your sub numbers.) https://t.co/tDUGGEwW92

This ultimately prompted the official Street Fighter Twitter account to step in, drawing the lines for the now-confirmed rubber match. They revealed through a tweet that the two Superstars will meet for the final confrontation. Additionally, the tweet includes a hilarious and intriguing look at their rivalry.

BREAKING NEWS: We just spoke with @XavierWoodsPhD and @KennyOmegamanX and they've agreed to settle their #SFVAE feud in one week – June 14 during E3! pic.twitter.com/QolOVdzE9n

One takeaway from this announcement is that Omega and Woods will both seemingly not come alone. Woods referenced The New Day, claiming he would be bringing two friends to back him up. Omega attempted to call AJ Styles to help him, but that didn’t go so well. Can Omega find someone to accompany him?

We previously reported that The New Day is scheduled to attend E3, with expectations being that they could reveal the WWE 2K19 video game. While that is still possible, it does make the likelihood of those rumored leaks decrease.

Who do you believe walks out of E3 victorious, as the Booty Shaker takes on The Cleaner?