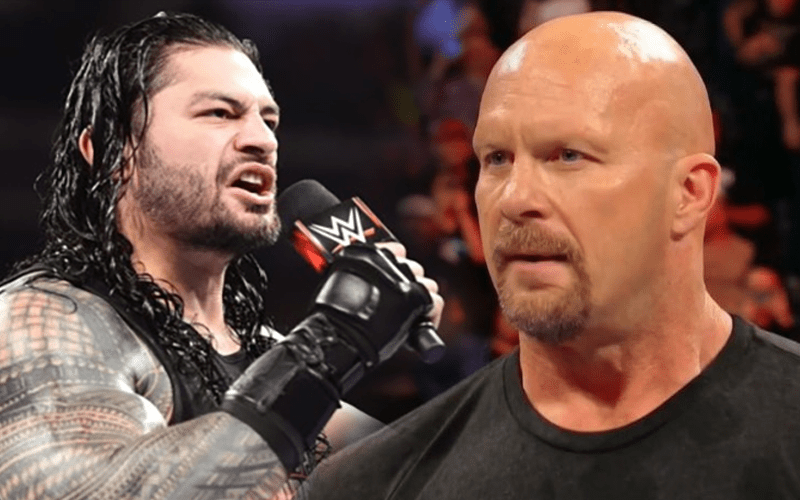 Roman Reigns recently sat down with The Express to comment on Stone Cold’s most recent argument that the Big Dog should turn heel to help flesh out his character. This isn’t the first time the Rattlesnake had this input. Austin truly believes that a proper traditional bad-guy run is just the type of refreshment that could spark interest in Roman as the top guy. Here’s what Reigns had to say on the matter.

I think everybody has their opinions. Like ice cream, everybody has their flavor, everybody has their opinion. It’s Stone Cold Steve Austin. He definitely knows the area and the territory that I’m in. He knows what it’s like to pull the trigger and be a workhorse. So I think there’s definitely a lot of truth in what he has to say and I value his opinion. Is it going to happen? I can’t guarantee that. It’s one of those situations where you kind of got to take it week by week and just understand the role. I definitely think there is a lot of great truth to what he’s thinking and his knowledge in the game. But Stone Cold is not my boss.

While it is hard to disagree with Stone Cold based on his success in the business, Reigns does make a valid point. He is garnering so much response everywhere he goes that his character is well above the simple babyface/heel formula. While some of that heat goes to Vince and the backstage creative team for the large “push” Roman has been getting over the years, it is still the man himself who elicits such responses.

Will we ever see a Roman heel turn. If so…it’s clear who you should feud him with.