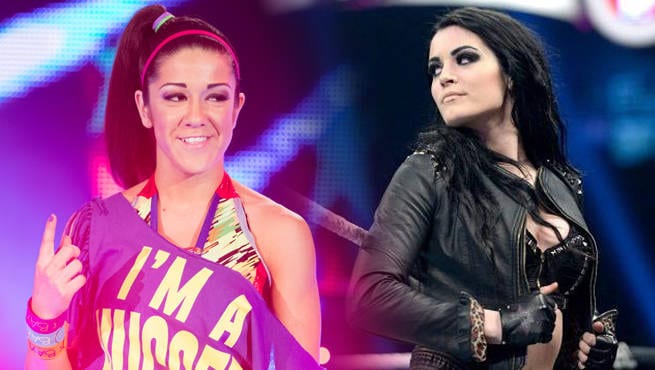 Paige’s in-ring retirement shook the WWE fanbase but it also had a lasting effect on the locker room as well.

Bayley recently spoke to Sky Sports about Paige’s retirement where she opened up in a big way about how much it meant to her watching Paige go through this career shift from the leader of Absolution to SmackDown Live GM.

“We all know going into this business and stepping in the ring we all know there’s the possibility of any kind of injury. But you’re never expecting it to happen and when it does it’s just the worst thing ever.”

“Paige is somebody who is very close to me outside of the ring. She helped me when I first got to NXT. Like, she was the only person I knew when I started. We had met in Shimmer. So she kind of like looked out for me and introduced me to the right people… I felt like I was cool because I knew Paige.”

“We were neighbors and we hung out all the time so we were very close so it was hard to see [Paige’s injujry]. But she is like such a good person and such a positive person that she’s accepted her role that she’s in now as SmackDown General Manager. I think she’s doing such a great job because she’s such a character and I know she’s going to do amazing things going forward in the company even though she can’t be in the ring anymore which is heartbreaking but she’s just incredible. She’s going to be successful in anything she’s doing.”

You can check out the clip from Bayley’s interview below to hear for yourself.

Paige obviously heard this interview and the kind words from Bayley and replied calling The Hugger one of the sweetest most genuine people she knows. This obviously meant a lot to Paige as she continues the transition between being an in-ring performer and backstage personality.

Bayley. One of the sweetest, genuine people I know. Thanks for positivity and friendship ❤️ https://t.co/Cw1rMSO04o