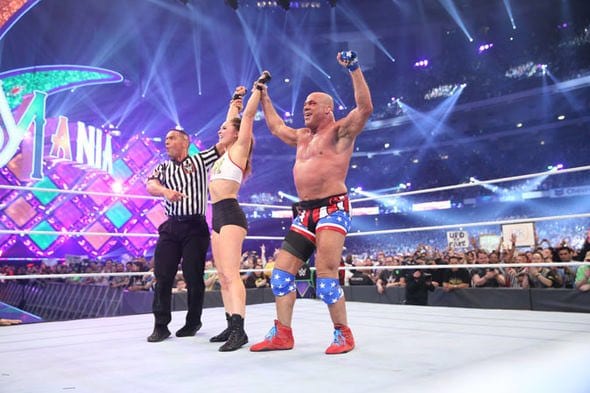 Several fans have questions about why WWE booked WrestleMania 34 the way they did. One of the questions some people had was why Drake Wuertz was chosen to officiate the Ronda Rousey and Kurt Angle vs Stephanie McMahon and Triple H match.

Although this was one of the biggest matches of the night this referee who usually frequents NXT ended up in a position where he got to raise Angle and Rousey’s hands when all was said and done.

WrestleVotes reports that Wuertz made a play backstage for the match with Triple H and it apparently worked. This not only surprised all of the main roster referees but it also gave Drake a nice payday.

Something I heard recently… if your wondering why NXT ref Drake Wuertz worked the Rousey / Angle tag at Mania, arguably the biggest match on the card, you aren’t alone. Heard he made a play for the match w/ Hunter and somehow got it, surprising all the main roster refs. pic.twitter.com/hHJN5crDFa